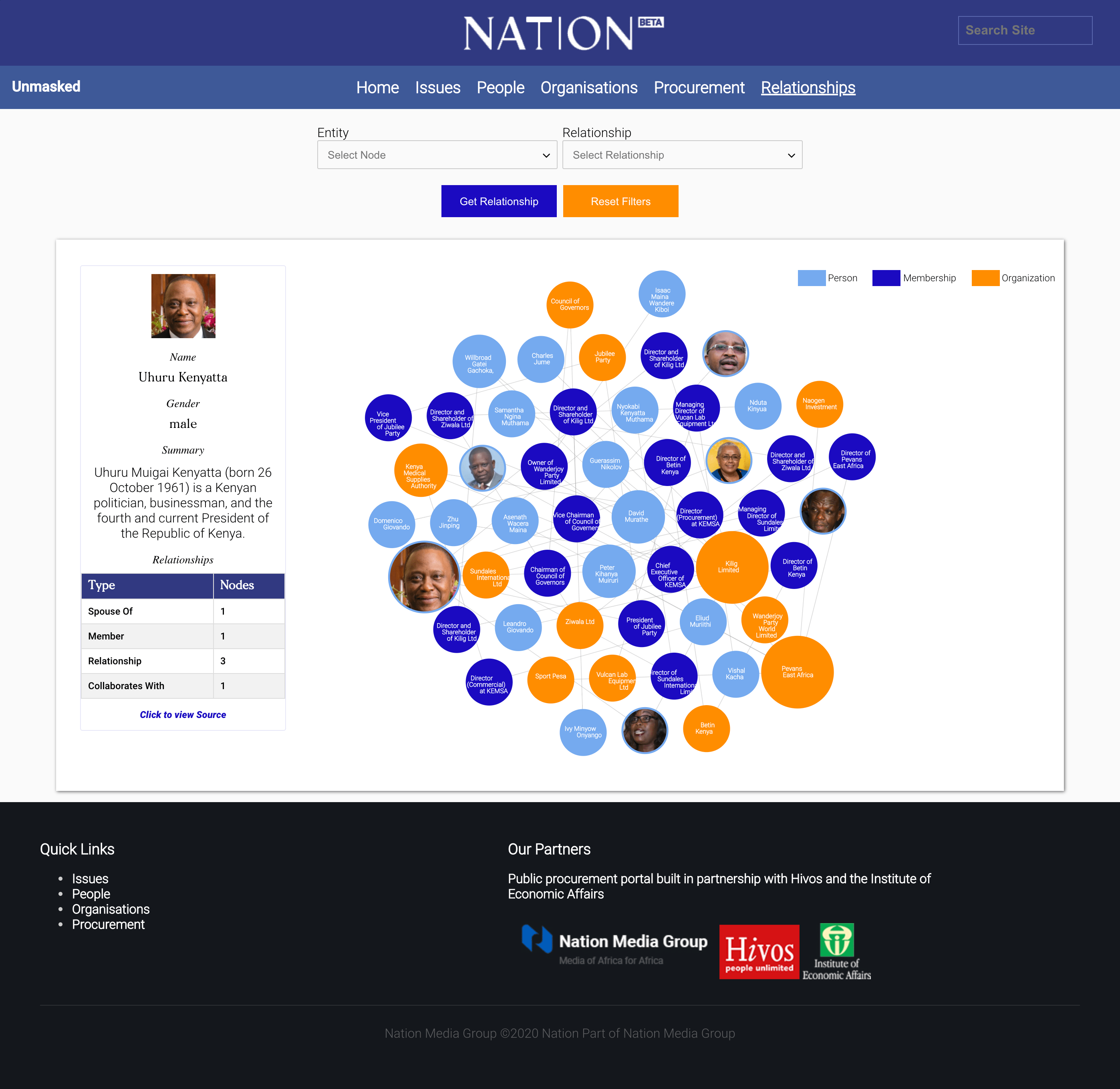 The Nation Media Group created the project because in politically and technically constrained environment like Kenya, data for journalism is hard to come by and key information is made public by journalists and civil society.

Open data generated from stories increases value for all reporting, by providing insight to past and future stories while unmasking the complicated relationships behind grand corruption of people in power and associated people and organisations.

The project pulled  together multiple stories on issues such as #COVID19Millionaires exposing the different actors, government agencies and companies involved.  The insights gained from curating the procurement stories in Kenya enriched data and investigative reporting at the Nation Media Group resulting in compelling stories including: How Sh9bn Kemsa plot was nipped in the bud

Besides enhancing the reporting of procurement stories, other major impacts of the investigative Covid-19 stories done by NMG as part of the project include:

Unmasked, increases the value of reporting for a newsroom, by connecting and building upon past stories, where each reported story contributes to providing a more complete understanding of the topic.

The platform enables journalists to quickly provide deeper context and insights when reporting, by exposing connections to past stories that might have been overlooked. The use of simple forms based on open standards enables capturing of complicated data and relationships such as beneficial ownership, without requiring expert knowledge.

The South-South cross-regional collaboration in development of this platform between Kenyan and Malaysian data journalists, shows that innovative techniques in using open data standards for reporting and investigations are possible and applicable in similar data and politically constrained environments for data journalism.

Publication of open standards compliant open data via a public API enables not just the newsroom, but other public users to innovate such as the interactive data visualisation of relationships.

This choice allowed for rapid development and implementation of the standards, while providing a user friendly interface for entering and managing data from stories.

It provided a way to easily join up or extend overlapping data fields from different standards, such as extending fields for a Person from Popolo-spec with additional fields for Politically Exposed Persons (PEPs) from BODS. Similarly, more detailed information for people and positions are made available for OCDS contract information, by using the same content for Persons that was extended before.

Custom views on the data, also allowed the platform to be used for different use cases for media in Kenya and for anti-corruption in Malaysia.

It provides different workflow and access states, for which ongoing investigations and new data for unpublished stories, can be kept private for internal use until publication. Full text search throughout the platform allows journalists to not only search data, but also text in supporting documents including images.

Publication of open standards compliant open data, via a public ReST API that enables data journalists internally and externally to create visualizations or use tools to use data for data or investigative journalism.

A script was also developed to export the data, into neo4J to enable visualization and exploration using network graphs.

Finally the platform is open source allowing others to also use it and where updates and additional features are shared among implementers.

The project had to find a way to showcase how open data, especially procurement data can support journalism in uncovering corruption in procurement, in an environment where there is limited open data. It also had to do it with very limited human resources.

Due to Covid19 it was delayed and resource constrained, the entire platform was mainly developed between just two developers on a part-time basis, with additional support from NMG in-house journalists and where all interactions including workshops were done remotely between Malaysia and Kenya. The pandemic  also made it difficut for the journalists to go to investigate leads generated from insights derived from the platform for followup investigative and data driven stories.

Despite the challenges the process of enriching  the platform with more content by journalists and developers is ongoing.

Unmasked is a testament to the fact that in environments with limited open data provided by the government, open data can be generated by the media through day to day and investigative reporting.

Open data standards can provide the structure needed as guidance for investigations, but also for collaboration in capturing and re-using data within the newsroom between different teams. A sports reporter could be reporting on a takeover bid of a football team, and be entering data on beneficial ownership without being a domain expert, while at the same time, possibly getting additional information on the persons and companies involved for an unrelated investigation for a story done by another team.

Finally, in an era of short news cycles and revenue, that project also shows that media can generate and publish open data through reporting, which in turn increases value by extending the relevancy of a story with each new connection made through data for new stories.

That data captured through reporting, contributes to open data that increases value for the entire newsrooom and organisation.