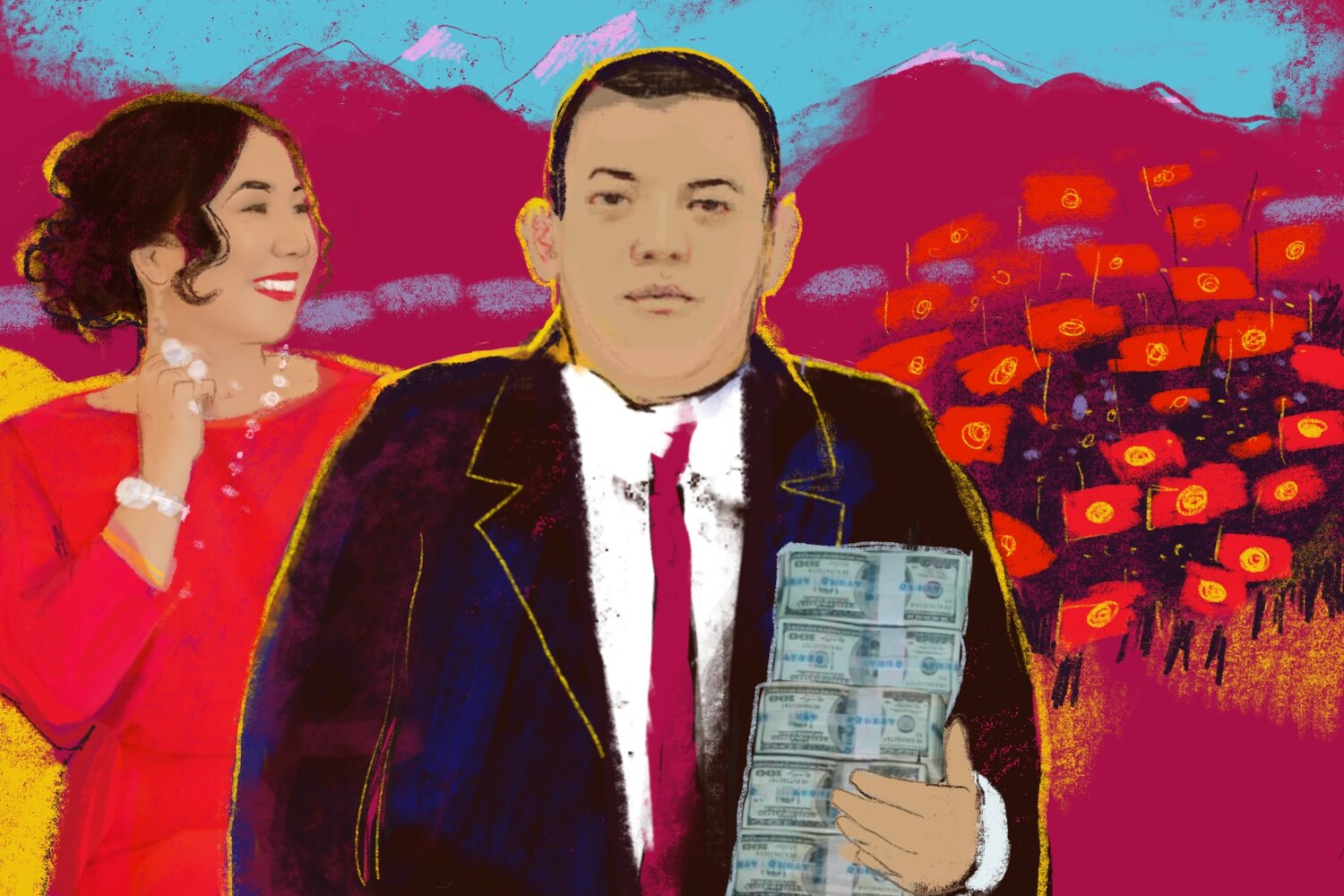 Credit: This project is a collaboration between OCCRP, Kloop, RFE/RL’s Radio Azattyk, and Bellingcat.

During his years in customs, Raimbek enabled and profited from a massive smuggling empire worth over a billion dollars.

But though Matraimov was later fired, his stranglehold over Kyrgyzstan’s customs service has only grown. Our stories showcase his family’s extravagant lifestyle; unveil his connection to an infamous underground criminal boss; and explain how the Matraimovs converted their wealth into political clout.

On October 5, 2020, just days after publication, a mass protest took place in Bishkek. Citizens were outraged at the corruption the stories revealed — and at the fact that the Matraimovs’ political party, which benefited from their illicit wealth, had done so well in the parliamentary election through vote buying and other illegal tactics.

The protests quickly grew into a popular uprising and a revolution that led to the ouster of the president and the cancellation of the election results.

Kyrgyzstan’s new government has promised to pursue corruption with a new focus. On October 19, the State Committee of National Security (GKNB) announced that it was investigating Raimbek Matraimov’s corrupt customs schemes, which had been revealed in the investigation. They said they had already identified 40 customs employees tied to Matraimov.

On the next day, Matraimov was arrested (but later released under a pledge not to leave Kyrgyzstan). The new government reached an agreement that he would pay about $24 million into the treasury as compensation for the stolen funds. He is now on trial for corruption.

On October 22, Kamchybek Kolbaev, the criminal boss our investigation links to Matraimov, was arrested under charges of “establishing organized criminal groups.”

Kyrgyzstan’s new post-revolutionary acting Prime Minister has pledged to eliminate corruption in the customs service and introduce a number of anti-corruption measures.

One of our sources, who was both a witness and a victim of Matraimov’s corrupt schemes, was released from custody after the uprising. He had been imprisoned after speaking with reporters.

On December 9, the United States sanctioned Raimbek Matraimov and his spouse under the Global Magnitsky Act.

On December 24, the GKNB head told the press that Matraimov had confessed to having established corrupt schemes in the customs service.

As it turns out, Raimbek’s wife was an enthusiastic social media poster. Reporters gained access to her account and found hundreds of images that showed her, her children, and her friends cruising on private jets, enjoying yacht outings, and staying in deluxe hotels. Her posts were used to make an interactive timeline that shows the family travelling the world in luxury even as Raimbek worked in government.

Reporters also used his wife’s social media posts to catalogue her purchases of luxury watches, clothes, shoes, bags, and jewelry. These were listed in a spreadsheet, and web tools such as Yandex Reverse Image Search helped reporters identify the items and establish their value: Over $400,000 in total.

The photos also led reporters to a previously unknown acquisition: A penthouse apartment in Dubai. Google Earth Pro, Street View, and corroborating photos posted on social media were used to identify the exact location of the Matraimovs’ new apartment.

Turning to more traditional investigative methods, reporters used the Kyrgyz land registry to find two dozen properties — from elite apartments to busy places of commerce — owned by the Matraimov family. Analyzing the associated corporate records showed that many were acquired in a dubious way. An interactive map published with the project details these possessions and explains their backstories.

Corporate and tax records enabled reporters to build a database of Matraimov companies and use a tool called Maltego to visualize the links between them. A public list of Kyrgyz voters helped locate more relatives and connections. On-the-ground reporting then uncovered how the family used its network of proxies to obscure the virtual monopoly it had built over major international trade routes.

Many Kyrgyz reporters have been attacked for reporting on the family. While working on this investigation, an RFE/RL reporter was warned by a former Matraimov associate that the shadowy operator wanted him “dead or alive.” He provided proof showing that the reporter had been followed by a private detective. Moreover, one of the key sources for a related investigation was murdered.

Extreme measures of secrecy and security were undertaken at all steps of the reporting, especially for journalists working on the ground in Kyrgyzstan.

Reaching sources was difficult because the Matraimov family is so powerful and influential that few were willing to discuss them. Lots of time and dedication was required to build trust. One source, contacted because his business had been seized by Matraimov associates, was arrested and jailed.

Reporters faced an ethical dilemma when a source asked for a delay in publication because she feared her husband, who was involved in one of the stories, could come to harm. We made the difficult decision to move forward because the stories were in the public interest and our judgement was that the safety risks were minimal. Later, she understood our position and took no offense.

A regional office of one of the publication partners was surveilled by unknown people every time the Matraimov family was sent requests for comment. There were also constant online attacks by trolls and bots working in support of the Matraimov family.

Another difficulty was obtaining corporate documents. At one point, the Kyrgyz Ministry of Justice refused to provide company information in violation of the freedom of information act. Kloop has sued the ministry and the case is now before the Supreme Court.

This project shows the value of approaching an investigation from multiple angles, covering the political, economic, and even social aspects of corruption. Instead of limiting the stories to examinations of individual instances of corruption, the stories set these criminal acts in the context of Kyrgyzstan’s fragile political system and struggling economy.

This holistic element is precisely what was missing from previous reporting about the Matraimov family. Some of their suspicious acquisitions and actions had been reported, but no outlet has ever published a comprehensive look at this family, explaining not only what they had done but how they had done it — and how Kyrgyzstan’s brand of crony politics enabled them to get away with it.

In order to maximize the impact of these investigative stories, the project was intended from the ground-up to be a compelling narrative experience. Capturing the human element was prioritized in reporting, writing, and editing.

Multiple interactive features, as well as charts and explanatory boxes, ensure that readers understand the complex criminal schemes being described and appreciate their impact. The reporting is backed by two explainers that prove, step-by-step, how some of the most important findings were established. In a region known for sensational journalism and widespread rumor, these materials establish the investigation as a trustworthy standard and model for future reporting on crime and mass corruption.

Such a sprawling investigation, with multiple partners and reporters working in multiple languages, would not have been possible without intentional project management and a systematic way of storing and sharing data. Databases, calendars, shared drives, encrypted group communication, and other tools were employed to manage the project — and maintain security in a dangerous environment.