The coronavirus epidemic is changing emoji usage on Venmo

The coronavirus epidemic is changing emoji usage on Venmo 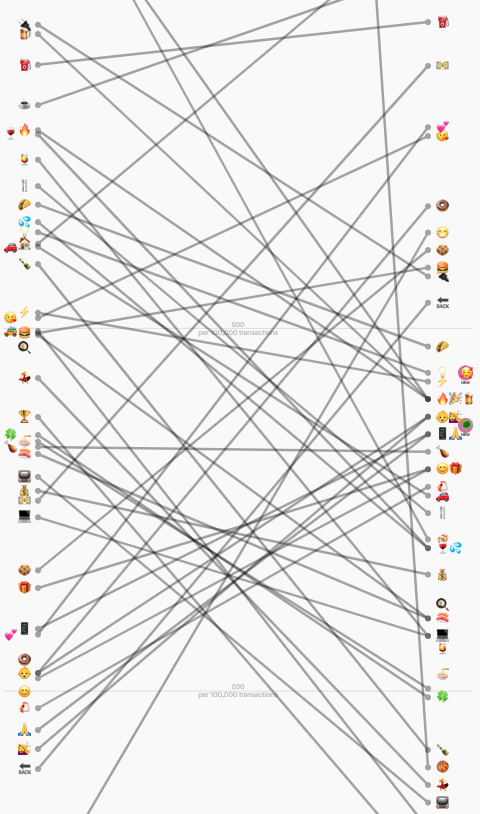 As Covid-19 swept across the US and lockdowns ensued, what used to be everyday transactions—say, paying a friend for pizza or a taxi—drastically changed. Daniel Wolfe was able to illustrate these sharp declines and rises in person-to-person payments by comparing the change in usage of emoji in Venmo payment messages. The results reveal not only the broad shock to society—basketball emoji usage was way down because the NCAA tournament was canceled—but also the micro trends that bubbled up, like sending a nurse money for coffee or a friend payment for sewing a mask.

Despite being written only in English and Venmo only being available in the US, the piece garnered notice around the world. We saw readers sharing the post with messages in English, Japanese, French, and Spanish, which is indicative of how Wolfe’s visualization clarity broke through language barriers. The item was discussed on one of the US’s most widely listened to radio program, used by at least one US school district, and cited in numerous newsletters as a way to understand how society was coping with the outbreak.

The data was collected using a python and shell scripts, cleaned and analyzed using python in a jupyter notebook, then visualized with D3.

Collecting the Venmo data is not easy. We had collected the 2017 data for a story then, and at that time there was an API that could be used to access public transaction data. By 2020, that API had been shut down so we had to periodically download the limited set of transactions that Venmo published to its website during the month of March then treat that data as a sample to do our calculations.

Parsing emoji is also complicated, and we had to come up with ways to extract the right meaning from the characters. For instance, a person emoji can be given various skin tones or genders. We had to determine whether a multi-part emoji was representative of its use or if combining those uses into one representative emoji would be better for the analysis. That meant grouping emoji like “skin-tone-4 haircut woman,”  “skin-tone-2 haircut man,” and “haircut woman” together as “haircut”.

First and foremost, journalists can learn from this piece that data and visualization can be the entire story rather than just an aspect of it. That words can be formed around the design and layout of an experience rather than always the other way around. It can also be used as an example of how data collected by companies for reasons unrelated to the reporting can be used to tell a compelling narrative. It also shows that stories about business and personal finance are wonderful vessels to understand our society.