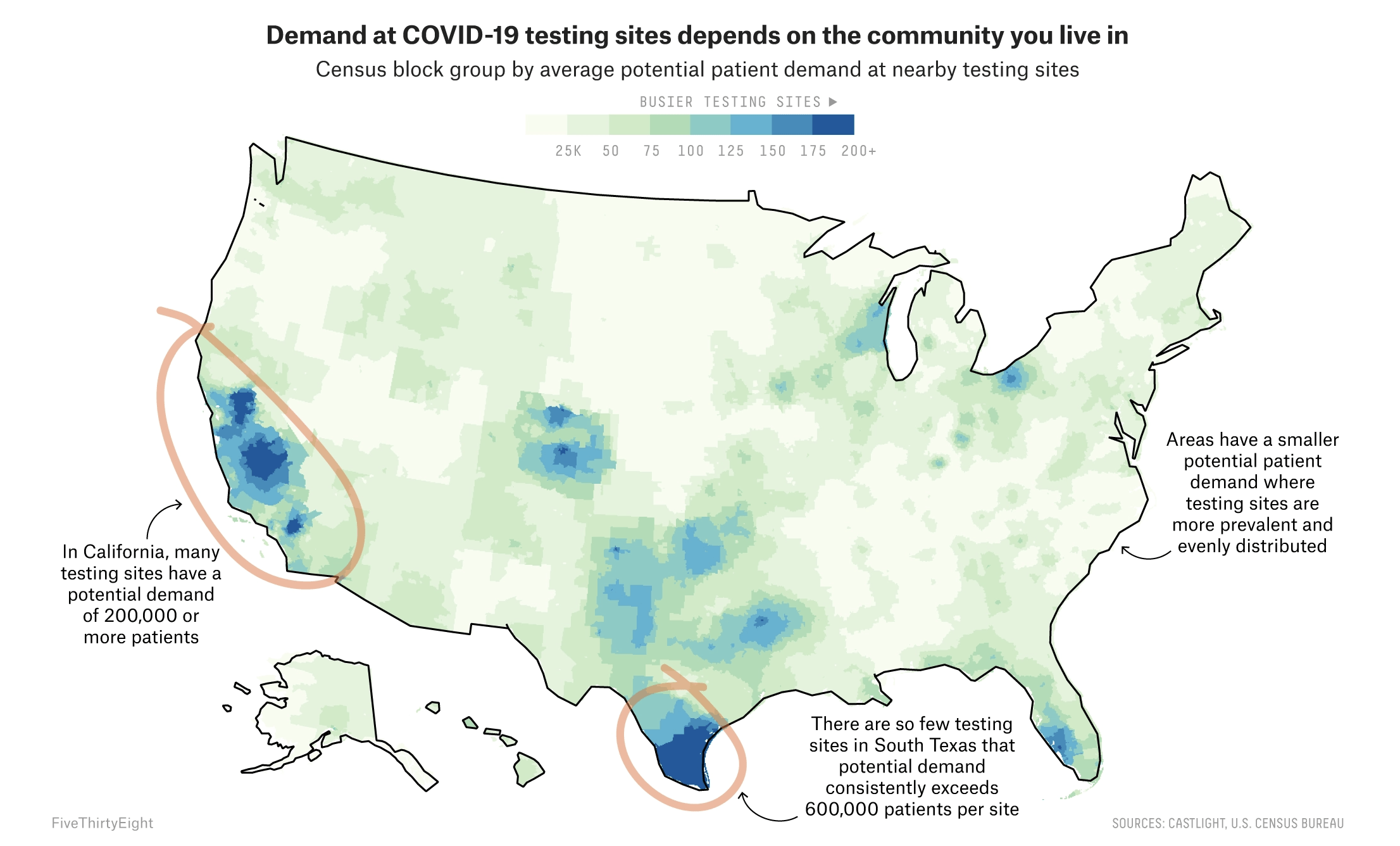 To our knowledge, this was the first nationwide review of COVID-19 testing site access. The analysis, by FiveThirtyEight, ABC News and ABC-owned television stations, found that testing sites in communities of color in many major cities faced higher demand than sites in whiter or wealthier areas in those same cities. The result of this disparity was clear: Black and Hispanic people were more likely to experience longer wait times and understaffed testing centers.

In addition to a feature-length story, this analysis led to further reporting by ABC-owned television stations, a video explainer and an episode of FiveThirtyEight’s coronavirus podcast, PODCAST-19.

This project — featured on Good Morning America, Nightline, 20/20 and elsewhere — helped bring light to a racial disparity in the COVID-19 pandemic (access to tests) that had been receiving far less media attention than other disparities (morbidity, for example). This reporting and analysis helped show how and why those disparities in outcomes happen. As a result of increased attention on the gap in access to testing, many states and cities launched and/or strengthened programs aimed specifically at adding testing access capacity in Black and Hispanic communities and neighborhoods.

In addition to the testing site data from Castlight Health, we used the 2014-18 ACS to obtain demographic data on American cities. We then used the statistical software R to develop an algorithm which calculated how many people would be projected to use each testing site, based on the number of people, the sites’ proximity and the number of available sites. We compared block groups that were majority-white, majority-Hispanic and majority-Black within urbanized areas over 1 million people to see how accessible different testing sites were in different cities. In LA, we also used an over-time approach to compare racial disparities in access before and after the city made a concerted effort to expand to lower-income areas. We showed that this expansion helped, but that racial disparities in access remained.

The visual representation of these findings relied heavily on combining aspects of the data analysis with cartography. We used GIS analysis in R to generate maps that allowed us to compare testing site demand by census tract and demographics. We then used Adobe Illustrator to finalize the presentation of these maps to accompany the feature-length story, including the integration of map elements drawn by hand in Illustrator that added a personal identity to the graphics.

We complemented this data-driven approach with traditional reporting in the cities our data analysis highlighted, interviewing people and politicians to understand why this had happened, what was being done to remedy the situation, and what the consequences were both for individuals’ lives and for containing the pandemic at the neighborhood or city level.

The hardest part of the project was trying to understand how to take population density into account when assessing disparities in access to testing sites. There are obviously going to be more testing sites where there are more people — but denser places also have a different racial composition than sparsely populated places. We considered calculating something like the number of people per testing site in each county, but county borders are porous, and people can get tested in nearby counties. The algorithm we came up with was based on the assumption that people would go to closer sites, and looked at how many people each site would have to serve based on the number of people and other sites nearby. It let us compare racial disparities in access while accounting for density in a way that made it part of the story, rather than a pesky confounding variable.

The other big challenge was how to visualize these disparities. We felt good about the metric we had developed, but it wasn’t obvious how best to visualize it. Mapping two separate variables simultaneously — in our case, race and ease of access — is not easy, but we wanted to show the geographic component of the analysis as well as the raw stats. We did it by dividing each city into the majority-white and majority-Black or Hispanic areas, and showing ease of access for each.

More specifically: Our reporting provided anecdotal evidence that Black and Hispanic communities had less access to COVID-19 testing. Our data-based measure of testing access was smart, but it was also built on a few assumptions — informed assumptions, but assumptions nonetheless. But the fact that the reporting and data analysis pointed in the same directions was key. The reporting gave us confidence in the analysis, and the analysis gave us a comprehensiveness and level of detail in finding and showing disparities that we never would have been able to do with reporting alone. The result was a reliable, national picture of access to COVID-19 testing by race and income — a picture that showed a level inequity that demanded action.