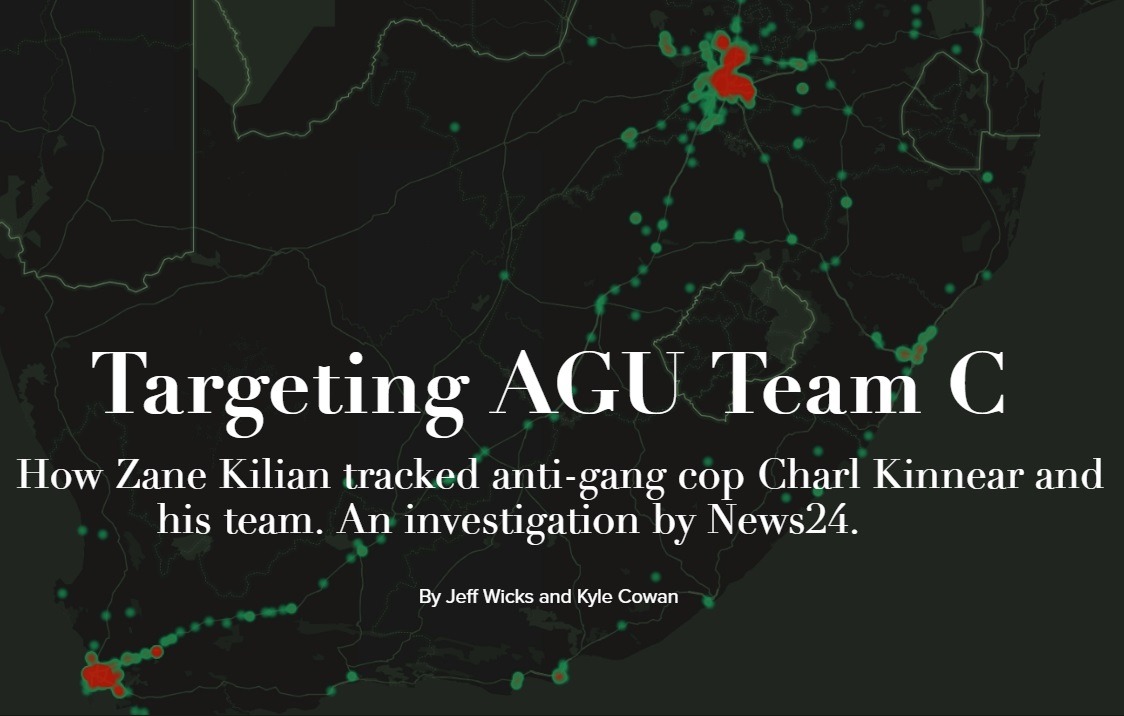 A policeman leading a gang task-force was assassinated and, in the weeks that followed, our investigation uncovered evidence that an underworld figure had used illegal cellphone technology to track his movements for months.

A dataset revealed how a pliant PI became an assassin’s hidden hand, his illegal surveillance tied to other attempted murders. Our project unearthed evidence that hundreds of people, including high ranking police officials, politicians, and rival gangsters were spied on.

What may be South Africa’s most extensive private surveillance scandal – with network operators surreptitiously selling access to their systems – was exposed by a murder.

The project – in long form and using data visualizations showing the real locations of hundreds of people who were surveilled – followed a narrative of how a failed sports star turned to the criminal underworld and became a spy.

Our investigation put paid to Zane Kilian’s public denials that he didn’t know who he was tracking, and uncovered evidence of a vast history of illegal surveillance, monitoring the movements of more than 600 people.

Access to the tracking technology – meant to be the preserve of law enforcement – had quietly been sold on the open market to hundreds of people, with our project showing the scale of privacy breach, which in some cases had deadly consequences.

Our investigative reporting revealed how mobile networks reactively shut access to their systems, which were effectively hijacked for this shadowy espionage for years without detection. Operators have launched high level investigations into the breach, and News24 is using freedom of information legislation to gain access.

Anti-surveillance experts have called for network operators, the legal custodian of their customers’ data, to face a parliamentary inquiry. The country’s Information Regulator has launched their own investigation into potential breaches of privacy laws.

Police top brass have also instituted an investigation into how this system had been infiltrated by criminal operators, and effectively used a life-saving technology to plan an assassination and other attacks.

The team utilised free cellphone directory application TrueCaller to identify a vast majority of the 5 000 plus records of cell phones that were tracked, and used other databases to further verify identifies. The visualisaitons were built using the 3D Map function on Microsoft Excel, and the website was built using Shorthand.

The visualisations were made possible with the GPS coordinates already contained in the database provided to us, but it required the use of Power Queries and numerous format edits to make the data usable for the 3D Map function. More sophisticated software was considered but ultimately, we chose to use tools that were readily available on a majority of personal and work computers around the world.

This project was not without its challenges, and likely the most significant hurdle to overcome was processing the raw data and putting a name and face to each of the thousands of cell phone numbers, with two reporters to do this.

We obtained an Excel spreadsheet which had been populated by owners of the illegal software platform, which had been handed over the police. The dataset provided key insight into every cell phone PI Zane Kilian illegally surveilled over a period of 17 months, and the corresponding GPS coordinates of the precise moment their phones were “pinged”, but they were still just faceless numbers.

We turned to call identification app Truecaller, which uses end-user agreements to generate a global bank of contacts on their servers and allows a user to input a number in a search, the result returning the user’s crowdsourced name [as it had been stored in the contact books of others]. There were two obstacles to surmount, firstly one is only allowed 20 number searches per day and the second is that results, because of crowdsourcing, lacked accuracy.

For six weeks, our team of two waded through the dataset, using Truecaller as an online divining rod. When numbers were matched to names, publicly available document searches and interviews were used to confirm the personal details of the survielled.

Once 5308 numbers had been identified to the best possible extent, freely available mapping software was used to develop patterns and networks, identifying key people who were being tracked by nefarious forces.

A not uncommon yet inherent hinderance is the personal danger when engaging criminal actors, who in this instance, have tentacles which have a considerable reach, even into the ranks of the police.

Our project was compiled a small investigative team consisting of just two journalists, who between them divided ours spent in the field, processing data, and conducting interviews, all while covering other investigative beats.

Operating within the media landscape in South Africa requires prudential management of resources, and to ameliorate this, we turned to solutions which were free. Using credit traces to identify thousands of individual cell numbers would have notched up massive costs, thus TrueCaller became our code book.

The data visualisations for the story were created using tools readily available on nearly all computers in the world. It’s not difficult, once you have the information, to experiment and create similar maps.

We were industrious in producing this project, a valuable tenet in African newsrooms which are often small and underfunded. This concept, one which is open to adaption for use in other projects, would be advantageous for African newsrooms to produce world-class data investigations.