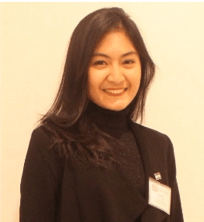 I am a recent graduate of International Relations (IR) major with a degree in IR. While most of my friends choose to work as a diplomat or a government official, I prefer to develop my knowledge by being a journalist. Before working as a full-time reporter, I’ve already had my internship here, on Narasi TV. Narasi TV is digital broadcasting media, producing one of Indonesia’s most favorite television programs, Mata Najwa, for the past decade. Hosted by Najwa Shihab, one of the most prominent journalists in the country who’s well-known for her ability to moderate a panel interestingly and to dig informations deeply from the speakers. Now, I am grateful that she is my Boss. Can you imagine, your role model can be someone who you share newsroom with, learning directly from her, and to observe daily what she does, hoping that someday you can also follow her footsteps?

I have always wanted to create something that brings impact to society. I believe that it’s part of the learning process to produce contents that could touch the hearts of many people or even to express our concerns and critics to the regulators. In addition to Ms. Shihab, I have other mentors who have been helping me to shape my skill and answering my curiosity. It’s precious to see their patience in answering my everyday’s questions, from politics, to social, to the economy, and culture. I definitely cherish every moment I have in the newsroom, because I know I’m not just reading theories from books, but I’m learning from the practioners themselves with years of experience.

Every day I challenge myself to propose a topic to producers, as I’m also working in the daily news division now. It’s so good to make videos about something that matters to me. And somehow, what a great feeling that I could do this for a living. My first ever news coverage was about refugees in Jakarta. It’s painful to see how people have to flee from their countries because of war, terrorism, etc. However, I also found an interesting fact that there are some of them who just went out from their homes just because they want to move to first-world country.
My 2019’s highlight was also when I covered the biggest demonstration after the one in 1998 that successfully collapsed Soeharto’s Government.

I took several classes about mobile journalism, story telling, basic investigative reporting, and photography for research and still craving for more. In the future, I wish I could have my master degree, specializing in politics and government, and how it’s related to the development. The outcome is not only benefitting me, but also my community even my country. I dream to be a journalist who’s expert at one thing and can help the aspiring future generation to make their dreams come true, too.

I still have a long way to go. My hope for myself will always be the same, to have a mindset of a disciple who loves to learn and to be taught. Just like when I was asked by a manager on the recruitment process, “People say that journalists exploit stories. What do you think about that?” I answered, “We don’t exploit. It’s never the idea of journalism. We open ourselves to furthermore develop trust with people. We tell stories so that in many cases, justice can be advocated.” Journalism, is literation moving for a cause.

The project’s titled “Tracing InsightID: The Digital Footprint of Papua Propaganda Machine”. So, the issue that erupted last year about Papua conflict that happened in several cities in Indonesia has been a long-lasting one. It was not new, but last year was quite catastrophic with many people died, demonstrations occurred here and there, the restriction of the internet by the government, and military apparatus placement in Papua. Foreign journalists couldn’t even move freely in covering the news about Papua. Benjamin Strick, a Bellingcat investigator, found bots on Twitter, Facebook, and Youtube used to spread propaganda about government’s programs toward the island, with the European communities as their targets. They also used English as their language. This was to tackle the issue in the international arena. Facebook eventually took those accounts down.

Then, Facebook uncovered Insight.Id, the state-controlled institution behind the operation, as a fake account to carry out the pages. A few hours after Facebook released the list, their website was no longer active. Someone who behind the Insight.ID desk, Pera Malinda Sihite, also deleted all of her social media accounts, from Twitter to Instagram. Pera was also the founder of Ladang.ID, as mentioned on her Linkedin account. The address of Ladang.ID office is the same as the Insight.ID office. So, we went to the location of the address, but the house number didn’t exist. We hardly located number 21A, only 21B. It’s strange that in January 2019, when we tracked the house using the Google Street View, house number 21B was supposed to be 21A. It was pretty visible that the number had just been changed.

We contacted Pera but got no response, so we contacted Fitri Handayani who was also Ladang.ID’s founder. She denied every accusation, including the USD 300.000 ads. She was firm that InsightID was merely a content creator company used against the Papua Separatist group. Fitri was unwilling to disclose her boss. Meanwhile, Fitri Handayani showed her anxiety to work as a propaganda machine. She poured out her feeling on tense poetry, “Berias dalam Narasi” which was up on her blog. We still got a chance to catch her poetry before she took it down.

“My heart groans for how many victims are down because of my fingers. My heart cries as I support to shut the democracy.” “Now I realized, it’s not about truth. It’s the propaganda that I have injected.” “I’mma keep silent, let his power tearing people down. My glasses are not blurry, I just cannot speak.” I’m sorry, Gie.

The blog has now vanished.

Departing from the “WHY?”, why we created this content in the very first place was to prove that there is a propaganda machine used by the government. Therefore, the public could be informed to be more aware of contents spreading in social media regarding Papua. We gain many positive reviews, especially when Open-Source Intelligent (OSINT) is still not yet that popular here in Indonesia. As we’re introducing OSINT in Indonesia, we hope that journalism in Indonesia could be more modern, hi-technology without neglecting the essence of journalism itself, such as honesty, integrity, and fact.

We got more than 26.900 viewers and more than 1.500 likes on Youtube. The producer of this project, Aqwam Fiazmi put the video on his Twitter (@aqfiazfan) and it gained more than 80.700 viewers with more than 1.600 like. The commenters raved about it after we exposed the truth.