Rough justice: How police are failing survivors of sexual assault

Rough justice: How police are failing survivors of sexual assault 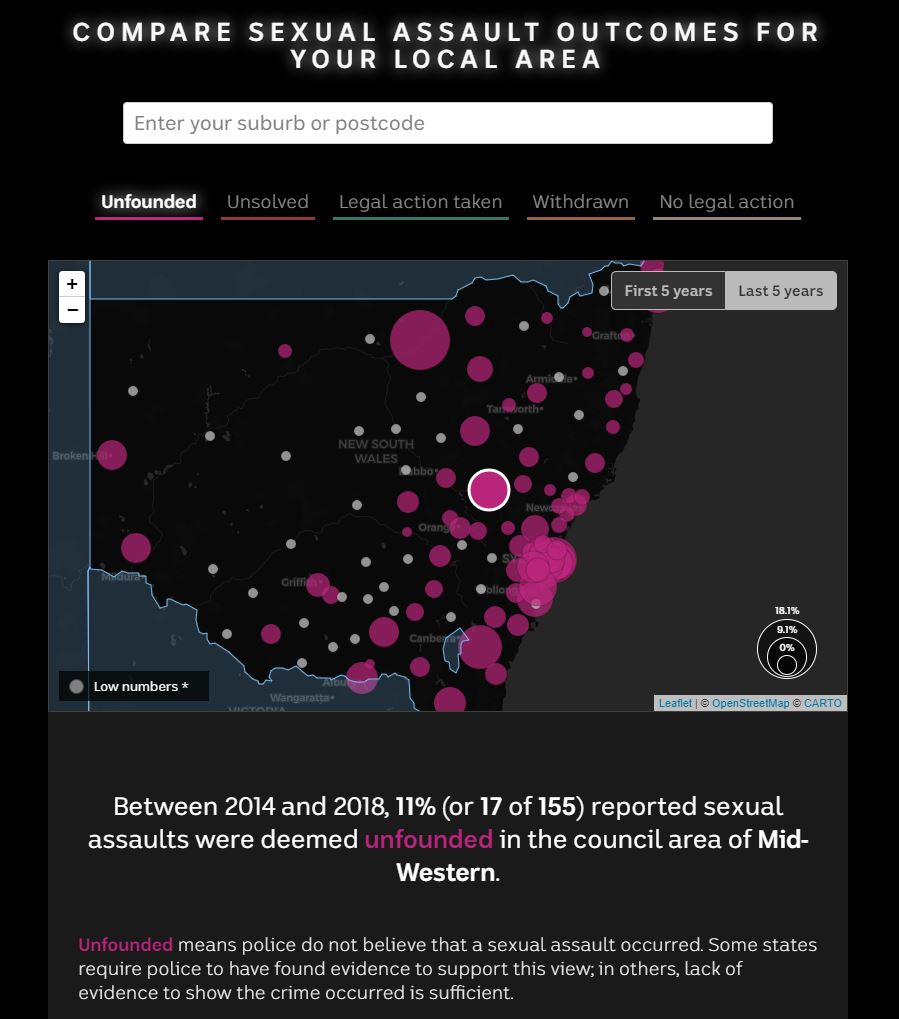 Rough Justice shows above all else the power of data in telling a story that otherwise would remain hidden in plain site. Until journalists from The ABC built it, there was no countrywide dataset showing how authorities handled sexual assault cases. Using freedom of information laws, the journalists requested data from multiple state agencies in order to piece together a national database of more than 140,000 reported sexual assaults between 2008 and 2017. The findings were breathtaking: roughly one in 12 sexual assaults dismissed by police as “unfounded.” In some regions, the number was as high as one in four. Through data, graphics, interactive and narrative, the team was able to tell a powerful story of how police are failing survivors of sexual assault. An impressive piece of work indeed.

To date, this series remains the most detailed national investigation of police mishandling of sexual assaults reported in Australia. Australia’s sexual assault data is separately administered across eight states and territories. Each has its own definitions and classification system but all eight are plagued by complaints of police mishandling of sexual assault investigations. Rough Justice is the only project to date to distil records from across all eight jurisdictions and over 450 police commands into a complete national picture. The data-driven analysis stretches back between 10 and 23 years, depending on jurisdiction, and includes, for the first time, every local

In New South Wales, Australia’s largest state, it also prompted an push for the NSW Attorney-General to establish a committee to investigate the improper recording of sexual assault complaints withdrawn by the victim.

In the Northern Territory – the only jurisdiction that refused to supply the requested data – the first two stories in the series (published Jan 28 and 29) led to widespread calls and mounting public pressure for NT police to release their sexual assault data. This happened 3 weeks later, with Part 3 (Feb 20) of the series revealing that NT police are less likely to pursue a sexual assault report than police in any other state or territory.

In addition to being the only project to compile a national, data-driven picture of police responses to sexual assault, Rough Justice is the first to:

The story opens with 140,000+ dots built in Adobe Illustrator and then animated “on scroll”. We felt the weight of the figure could only be truly illustrated by implementing a 1:1 ratio. The length of the scroll is hefty, exemplifying the enormity of the issue.

The article is dotted with expandable, first-hand accounts from survivors made with HTML, CSS and jQuery. The text glows to imbue each story with a sense of life, mimicking breath or a heartbeat. The negative space visually breaks up the density of the more complex data pieces and research.

The victim-survivors photographed requested different degrees of anonymity. We were able to respect their wishes yet maintain a consistent “look and feel” by using shadows, edited in Adobe Photoshop, to obscure faces/bodies – the extent of which the victim/survivors decided themselves. This technique allowed the survivors to literally ‘come out of the shadows’ and tell their stories – not only in their own words, but also on their own terms, with full agency.

To allow quick comparison between different neighbourhoods and police commands, we presented the data in a searchable map that presents a detailed analysis for the selected area. The maps were custom-built in JavaScript, using both the Leaflet map plugin and D3.js data tools.

Data mining, cleaning and blending was done using Excel, Tableau Prep and Tableau Desktop, while initial “proof of concept” visualisation and mapping was done in Tableau.

As a first step, this required familiarity with the unique classification system used by each of the eight police databases. Our reporter worked with two independent teams of experts to create a  framework for “mapping” dozens of police investigation outcomes across these crime classification systems.

The next challenge was to obtain the data with the specific granularity, structure and format that would allow the datasets to be combined under this framework.

Our reporter negotiated with police and politicians for more than a year to obtain this exclusive data for every jurisdiction. In some instances, it involved informal collaboration with police commanders and police statisticians. In others, we were only able to obtain the requested data after applying pressure through backchannels.

Having obtained the data needed, we then worked with our independent experts to painstakingly reassign numerous investigation outcomes from the different jurisdictions to a national category.

In terms of reporting, the hardest part was finding victim-survivors whose cases had not progressed beyond the police. As experts explained to us, “failure” at the police stage meant these people were more likely to bury their experience and withdraw from all types of institutional support, including from advocacy groups, grassroots networks and legal services.

So we relied on personal contacts, building trust over more than six months with a network that included several survivors who had never disclosed their assault beyond one or two friends or family. This proved transformative for some, including Lauren*. It took eight months to gain her confidence but when the story was published, she said she felt “very proud” to have done something positive” to help bring about change for others.

Sexual assault is regarded as one of the most serious and heinous crimes in Australia. Yet police mishandling of crime – and in particular, sexual crimes – has long evaded national scrutiny because of claims that police investigation outcomes cannot be compared across states and territories.

This authoritative series undermines these claims; in doing so, demonstrating the potential to carry out similar investigations for other categories of crime.

Crime reporting has traditionally tended to expose wrongdoing by revealing new information about a single case, crime or perpetrator. This project takes this worthy endeavour further: it uses a data-driven approach to uncover a long-running pattern of injustice across an entire category of crime involving multiple perpetrators, victims and police precincts.

The project also demonstrates that “new” storytelling techniques – such as data-driven investigation, graphics and interactive design – can be seamlessly blended with traditional person-centred storytelling to powerful effect.