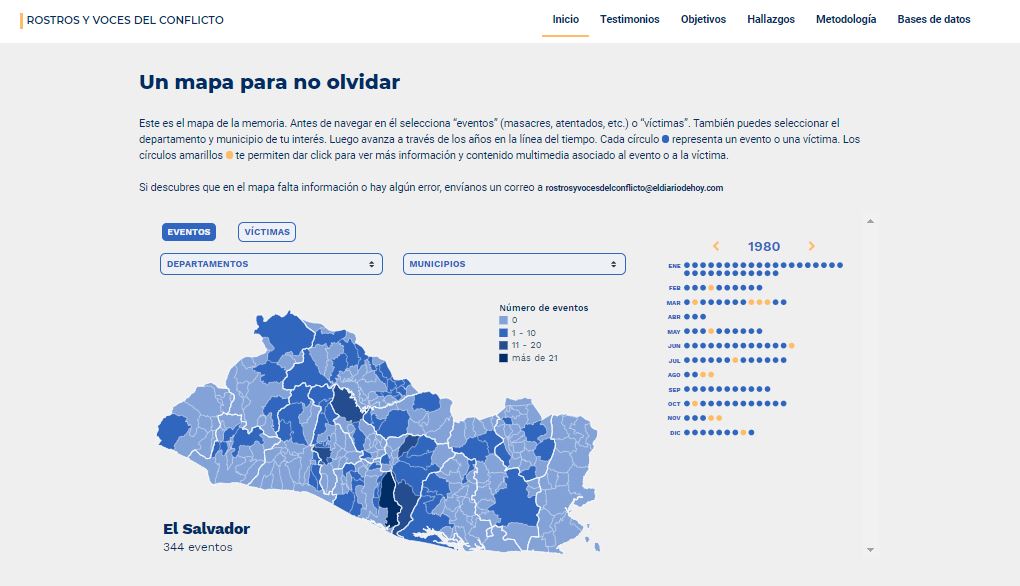 Faces and voices of the conflict is a digital memorial that, after the creation of two own databases on war crimes and serious human rights violations that occurred in the eighties, presents them on an interactive map together with videos of testimonies of victims and survivors.

The “victims” and “events” databases were constructed after consulting the editions of four newspapers published between 1972 and 1992 and include crimes against humanity and war crimes attributed to the army and the guerrillas.

Publications from organizations related to the victims, guerrilla and the army were also consulted.

Faces and voices of the conflict is a living project, constantly updated. After its launch, dozens of users wrote to us to share more information or to make small corrections to the published information. This has not served to contact new sources and publish new stories.

Another impact has been that, by being published by a media outlet that had a very right-wing position during the armed conflict, it has attracted the attention of readers and users who generally do not read and do not think about the human rights violated during the war of the 80’s.

Politicians, relatives of victims of the army or the guerrillas, academics and human rights defenders have welcomed this data project.

After a general amnesty law was declared unconstitutional and the door was opened for war crimes committed in the 1980s to be brought to trial, the issue of restorative justice and historical memory has risen to prominence on the national agenda. Faces and Voices of Conflict has brought information never before collected in one place to that debate.

A team of five people reviewed four different print newspapers from 1972 to 1992. The information we found on human rights violations and possible crimes against humanity and war crimes, we aggregated into Google spreadsheets. To this information was added the one that was in a monument in honor of the victims of the war in the Cuscatlán park in San Salvador.

In Cuscatlan Park there is a monument which contains a list of 30,000 names of those who died in El Salvador’s Civil War between 1980 and 1992. A El Diario de Hoy photographer took a high resolution photo of every element of the monument.

After that, using the OpenCV library we applied a a threshold treatment to every image and then used a tool named Tesseract to recognize the names.

Them, using a Python programming language library named Pillow, every picture was cutted and the results systematized in CSV files, which were united for storing.

The hardest part of the job was turning that data into history. It was very difficult to contact relatives of the victims or survivors of massacres willing to give their testimonies before a video camera. For our part, we prepare to address the victims and to accept when they identify some part of the story that they do not want to share.

The pandemic and the 80-day quarantine in El Salvador made this job even more difficult.

What other journalists can learn from this project is how the planning and work of a multidisciplinary team with a different vision of an event can enrich and carry out a journalistically ambitious task. Building a database with the serious human rights violations, crimes against humanity and war crimes committed by the State or by the guerrillas between 1972 and 1992 seemed an impossible task. But as a team it was decided what information needed to be collected and where to look for it. The editor sought the support of interns whom she trained to collaborate in the review of hundreds of pages of newspapers from which the information that was added to the databases was extracted.
The work could not have been carried out without this help. It was vital and important to have a methodology for external partners to join in the data collection task. The project started in June 2019 with planning; Data collection started in November 2019 and concluded in March 2020. Then came reviewing, cleaning and data analysis. For each task there was a team leader. Simultaneously, based on the data, relatives of victims were contacted to collect their testimonies and present them in videos and podcasts that are presented and added to the site as they occur.Finally, what other journalists can learn from this project is the need to have at least one person who knows a programming language like Python for data extraction and cleaning.