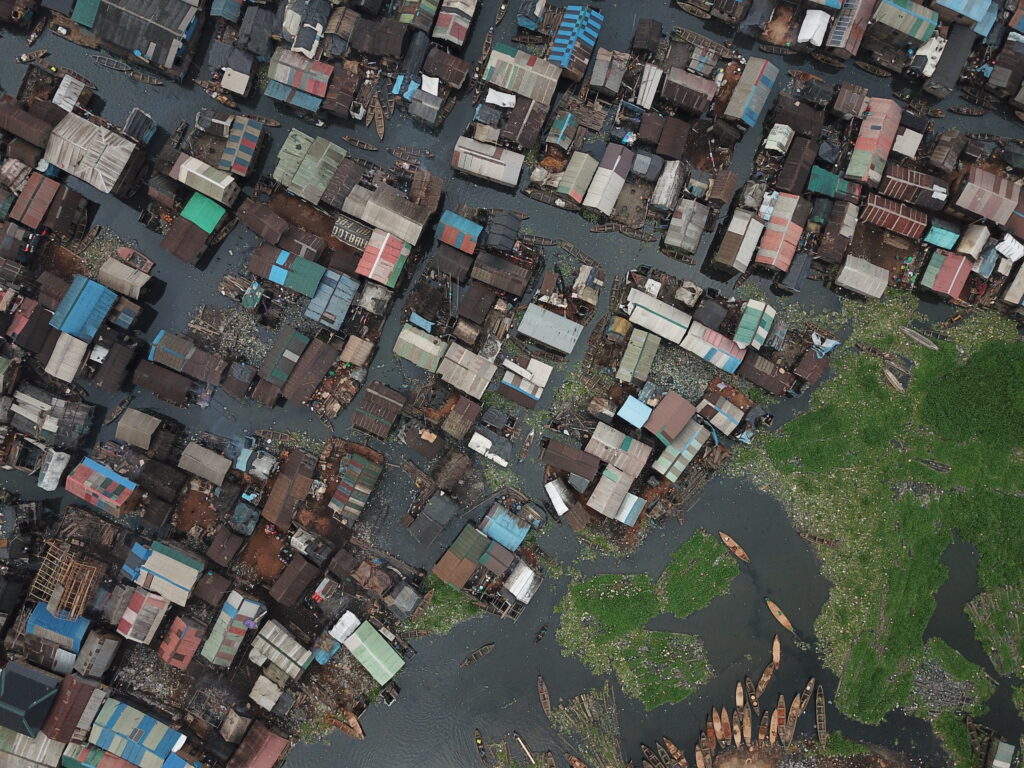 Not a typical news story you’d read online, not even a typical data journalism piece you’d find – as the headline suggested, this is about a place “Neglected and Unmapped,” a fishing community in Nigeria that is literally not on a map. A brilliant collaboration bringing together a news organization (the Guardian), civil society (Code for Africa), technology enablers (OpenStreetMap and AfricanDRONE), journalism funding support (the Pulitzer Centre on Crisis Reporting), and the local community, especially young women living in the area, this project managed to not only put a community on map with first-hand drone images collected by residents, but also tell stories of its people, history, and current struggles – against local politics, state governments, as well as climate change. The story is an alarming reminder of many such communities existing yet treated as non-existent, and a lively example of how data and technology could empower those who would otherwise never be seen.

Neglected and Unmapped was produced through a partnership between Code for Africa, the Guardian Nigeria, The Pulitzer Centre on Crisis Reporting, Humanitarian OpenStreetMap, MakokoDreams, AfricanDRONE and UhuruLabs.

Code for Africa (CfA) is the continent’s largest network of civic technology and data journalism labs, with teams in 12 countries. CfA builds digital democracy solutions that give citizens unfettered access to actionable information that empowers them to make informed decisions, and that strengthens civic engagement for improved public governance and accountability. This includes building infrastructure like the continent’s largest open data portals at openAFRICA and sourceAFRICA, as well as incubating initiatives as diverse as the africanDRONE network, the PesaCheck fact-checking initiative and the sensors.AFRICA air quality sensor network.

In this project CfA contributed conceptualised the project, managed and coordinated all parties involved (including the local community in Lagos and the local NGO partner, MakokoDreams), ran the field data collection and developed the data journalism campaign around it.

The Guardian Nigeria contributed to reporting on the mapping project conducted my CfA and partners in Makoko.

The Pulitzer Centre on Crisis Reporting was the project funder.

Makoko is one of Africa’s most unique inner-city slums, with a third of the community built on stilts in a lagoon off the Lagos mainland, accessible only by canoe. The rest of the settlement is on swampy land with little sanitation and few public services. Makoko is estimated to be home to 300,000 people, but government and residents claim the figure is higher. The numbers are hazy because the area appears as a near-blank space on maps — with little information about structures, density, or streets. This means it is almost impossible to properly track land ownership, plan infrastructure, optimize services, plan for emergencies, or support development.

Being a blank spot on the map means authorities never adequately allocate resources to Makoko, or — worse — exploit the lack of awareness to grab the land and displace dwellers. Neglected and Unmapped explored a bottom-up mapping project that helped the community fight for their land rights. The project combines data, satellite images, on-the-ground multimedia journalism, and long-form storytelling.

The project began with strategic partnerships and townhalls to introduce the project to the community and get their buy-in. This was a critical step, as years of neglect from officials, and individuals claiming to be working for their benefit had affected their perceptions of outsiders working in Makoko.

Once the community was brought on board, our team worked with people in Makoko to build their capacity and empower them to join the project. Fifteen local women and seventeen men were trained by the coalition partners to map Makoko using drones, canoes and open data platforms. Throughout the project 990 images captured by drones were uploaded to the OpenStreetMap and Java OpenStreetMap. The Humanitarian Open Street Map volunteers assisted in digitising the images. Additionally, 80 Points of Interest (POIs) were captured using The Open Data Toolkit (ODK) and dataset uploaded to openAFRICA. These POIs include sources of clean water, schools, healthcare facilities, places of worship, townhalls and more.

The mapping project was captured in a flagship story produced by media partners the Guardian Nigeria. This piece married drone journalism, geo-journalism, data visualisations and multimedia with first hand narratives of lives in Makoko to expose the challenges faced in the slum to an international audience. The project then received considerable international traction, receiving features in Agency France Press, Aljazeera, CNN, the BBC and the Guardian UK.

Mapping Makoko is an ongoing process. In 2020 the project team returned to Makoko and conducted fresh water samples for analysis, mapping a further 20 clean water sources as POIs in Makoko. We hope to continue mapping Makoko through future grant opportunities, as well as to use the collaborative model developed there as a blueprint for future data journalism projects.