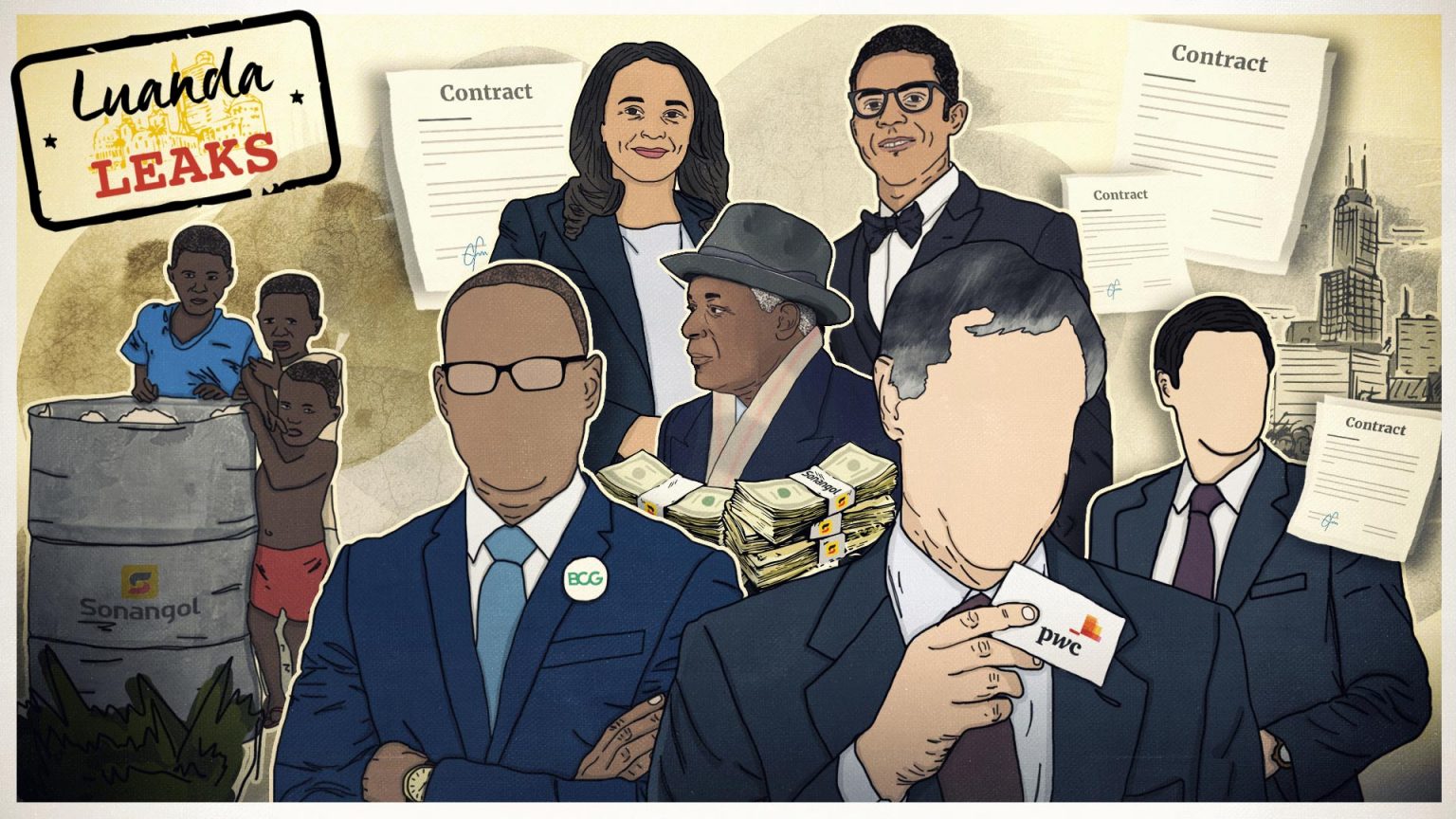 Luanda Leaks exposes the inner workings of a global business empire fueled by hundreds of millions of dollars in public money siphoned from one of the poorest countries in the world.

Drawing from more than 715,000 leaked records, public documents and hundreds of interviews, it casts unprecedented light on the mechanics of corruption at the grandest scale, and reveals how Western professionals play a vital, little-examined part in the blighting of countless lives.

Reaction began before we even published. In December 2019, after ICIJ questioned Angola’s government, a court froze dos Santos’ major assets, including banks, a telecom company and a brewery. The government said it was trying to recover $1.1 billion in lost assets.

When the stories went live, the floodgates opened. Angola’s attorney general charged dos Santos with embezzlement and money laundering. A provincial court labeled a deal to acquire the jewelry company de Grisogono that was a focus of our reporting as “fraudulent.”

In Portugal, authorities froze dos Santos bank accounts and seized all of her assets, including luxury properties and stakes worth hundreds of millions of dollars in major companies. The country’s top market regulator launched investigations of nine auditing companies that worked with dos Santos, threatening criminal charges if it could be determined they broke anti-money laundering laws in aiding dos Santos.

The head of PwC’s tax team for Angola and Portugal stepped down. The firm’s chairman said he was “shocked and disappointed” and launched an internal investigation. From a reputational perspective, the dos Santos story was the worst thing to have happened to PwC on his watch, he said.

PwC declined to respond to specific follow-up questions in December, but said that in the wake of the investigation a number of senior employees have left “or been subject to other remedial measures.”

The leak itself was of more than 715,000 records. Documents were in different formats (emails, PDFs, spreadsheets) and about half of the files were in Portuguese. To make this large trove of files searchable and share them with the team in a secure way, ICIJ used its research tool Datashare. As most of the team didn’t speak Portuguese, ICIJ used an open source software to translate the records, and have both the original and a translated searchable English version of the file in Datashare.

The high volume of files and unstructured data required additional efforts to analyze them. To help with the mining and reporting, ICIJ and media partners used machine learning to cluster similar types of files that could be of interest for the investigation and added filters with the results of those clusters to Datashare. ICIJ also used graph databases and entity extraction to facilitate establishing connections between the files.

ICIJ manually created massive databases from scratch to propel research and help analyze the material. We combined the records we obtained with corporate registries from more than a dozen jurisdictions, corporate documents and other datasets to compile and map an extensive—and exclusive—record of more than 400 companies owned or otherwise tied to Isabel dos Santos, her husband, or both, including 94 registered in secrecy jurisdictions. Each data entry was verified and fact-checked.

The records obtained by ICIJ included emails, government decrees, spreadsheets, ledgers, audits, incorporation papers, organizational charts, meeting minutes and videos, loan agreements, deeds, tax advice and tax returns. While the records, many in Portuguese, laid groundwork for stories, they were incomplete. They referenced other documents that were not included and events not further described. The reporting was like sifting through a giant box of pieces from countless different puzzles — and then finding that even when assembled, each was missing crucial parts. Much time was devoted to reconstructing transactions, tracing the flow of money from an Angolan or dos Santos business through shell companies and then into the legitimate financial system. Simply reading the financial documents required thousands of hours. ICIJ turned to forensic auditors and other experts to help better understand what we were seeing. Team members spent weeks on the ground in Angola, a country with no tradition of a free press and a difficult reporting environment. We chased leads around the globe, from Portugal and Brazil to Malta and Delaware. We interviewed hundreds of people, including government ministers, bank officers, company incorporation specialists and everyday Angolans. The persistence paid off: additional sources led to additional documents, helped fill in gaps in understanding, and pointed to new stories, including embezzlement of millions of dollars from the state oil company dos Santos ran to using her father’s backing to plunder state infrastructure funds to a mass eviction of an entire seaside community, driven out by bulldozers and police to make way for a dos Santos real estate development. Another considerable challenge comes with our model: fashioning a single team out of disparate and far-flung news organizations. We shared tips and bits of reporting on our bespoke internal communications platform, held hundreds of virtual meetings and met up on the

Faced with a trove of records in different formats? Consider a technological solution. ICIJ’s Datashare can power up collaborations and make the task of reading through documents across different desks and even newsrooms an achievable goal. Datashare is open source, meaning that any journalist can download and use it for free. (https://datashare.icij.org/)

For Luanda Leaks, we faced an additional hurdle: It wasn’t a few hundred documents that we wanted to collectively sort through—it was a vast trove of more than 750,000. ICIJ teamed up with Quartz AI studio to use “machine learning” to automate the sorting process. This subset of artificial intelligence could learn to identify similar groups of files more likely to contain stories—pulling out, for instance, balance sheets to queue up for review by our reporters. The results were later integrated into Datashare. Artificial intelligence experts who might be willing to lend a hand dwell in many sectors, including academia. Don’t be afraid to ask.

A set of original documents is the starting place for reporting, not the end. To build the company database, for examples, we started by pulling names and other relevant information from the files and then used public information harvested from company registries, databases and corporate documents to validate our findings and expand on what we were learning. To make sense of it, and to track our work, ICIJ manually built a database that compiled data on companies in which dos Santos or her husband hold, or have held, a stake as shareholder, directly or indirectly. ICIJ also relied on information gathered through previous investigations, including Offshore Leaks.