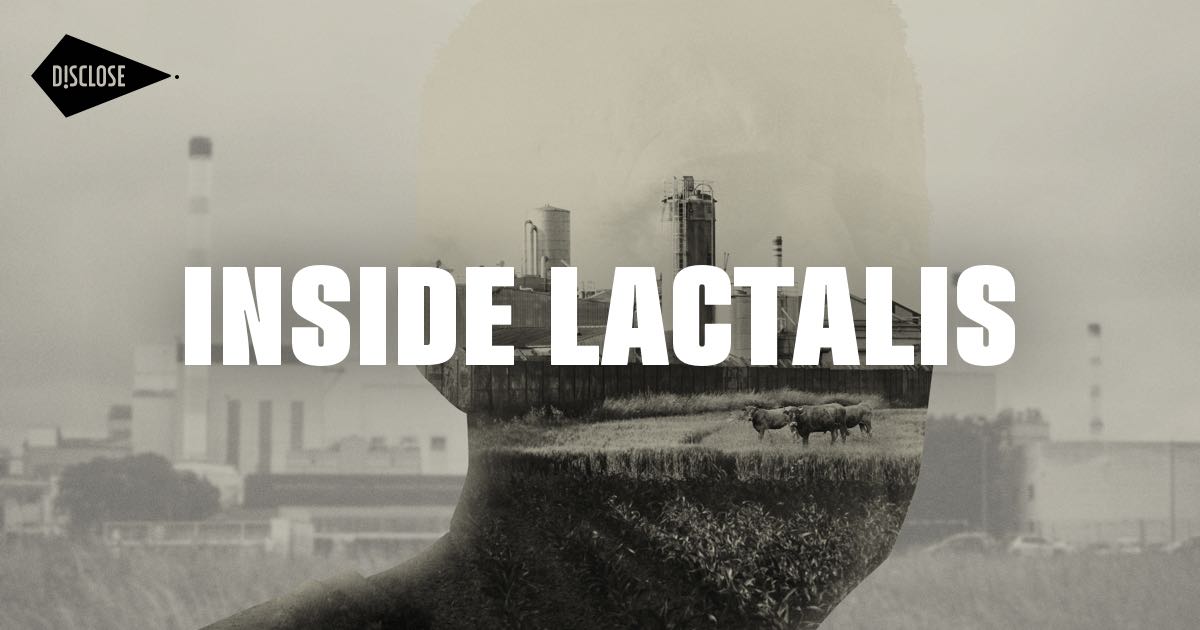 Disclose has spent a year investigating the Lactalis ‘system’, involving numerous interviews and the study of hundreds of administrative and legal documents. This lengthy research reveals for the first time the extent of the group’s questionable practices, and also a certain sentiment of impunity that appears to be present within the multinational; failings in the field of food safety, massive pollution of rivers, the dissimulation of information, failings in control mechanisms, large-scale tax evasion and the hunting of whistleblowers.

The project have a hudge impact in France, first because Disclose published with 5 partners media on radio (3 podcast broadcast on public radio France Culture ), online, and on TV ( a documentary broadcast on public channel France 2). The publication raised an audience of more thant 3 millions people in France. To further the public’s right to information, Disclose has published online all of the documents obtained, and which are listed under the plants concerned. We also created an interactive map who was use by several local media to continue our work. Two environmental NGO use the data provide online by Disclose to initiate legal prosecution for pollution against Lactalis. One NGO who fight against tax evasion used the financial documents published by Disclose to initiate prosecution against Lactalis. And one of the main farmers’ unions held Lactalis to account following our revelations. The fishing and river protection association wrote to the Minister of Environment to denounce the serious environmental damage caused by Lactalis. One month after our revelation, the Ministry of Environment announced the creation of a new criminal offense on ecocides for private companies responsible for pollution and damage to the biotope. Last impact, parliamentarians demanded that Lactalis repay the public subsidies received by the State. Regional councils decide not to pay subsidies to Lactalis in regions where factories were accused of polluting rivers.

Disclose use several tool to map the factoris of Lactalis, who were hidden because not register like Lactalis factories. For this we use data of the registry of commerce to find the sharholder of the factory, we were able to find 60 factories in France own by Lactalis. After find these factories, we use satellite imagery to map the coordinate GPS and discover that all factories were based close to a river. Then, we send FOIA’s request for each factories to the state authority responsible for environmental control and the authority responsible for sanitary control of factories to obtained documents that was documents that had to be public but were not disclosed by the State. We received hundred of documents from 2010 to 2020 : environmental and sanitary reports, the non-compliance orders of factories on environmental and health laws taken by the State authorities. We created our own data to analyze and categorize the information obtained on each factories. We read all the documents and put the result in a excel document, which allowed us to create data on the number of river pollution by 37 Lactalis factories over 10 years, the number of non-compliance with requests for compliance by the environmental protection authority, the impacts on the aquatic environment. We also ask the administration to obtained the analyzes carried out by the factories themselves on the pollutants discharged into the rivers. We cross-appraised the data obtained on the level of pollutants released, which enabled us to know what type of pollutants were released, in what quantity and if above the threshold authorized by environmental laws.Finally, we examined 113 documents which concerned the yearly accounts of companies owned by Lactalis and which appear to indicate a system of tax evasion to Luxembourg.

The group Lactalis do not published documents about environmental issue, it’s a very secret company and it was really hard to find information about these factory. We therefore decide to use the FOIA request on the documents that Lactalis is legally obliged to send to the State. But in France, public documents are ofen not disclose by administration at all level. On the state’s Opendata website, the data is mostly very old and not up to date. Public administrations in France regularly oppose FOIA requests from citizens and journalists, or simply do not respond. So it was really difficulte to obtained this document, and Disclose was help by a pro-bono lawyer. When they finally send documents, they are often unorganized, or in very heavy excel form with thousands of data mixed up.Basing ourselves on Article L124-3 of France’s environmental law code, and Article 1 of the July 17th 1978 law regarding access to administrative documents, we addressed a total of 66 requests for public information concerning Lactalis production plants, which were submitted to 34 prefectures (local state administration centres) across France. Following the refusals by administrations to communicate the requested information, Disclose appealed against their non-cooperation on 22 occasions before the French mediating body for access to administrative documents, the Commission d’accès aux documents administratifs (CADA) – the FOIA authoritiy. This resulted in 16 rulings by FOIA authoritiy  in favour of Disclose. Disclose addressed requests to five regional councils, four regional agencies of the food, agriculture and forestry administration (Draaf), and six regional public water management agencies, for details of subsidies granted to the group’s production plants. Resulting from an exchange of around 350 emails with public administrative services.

This investigative show how you can investigate on a company who hidden informations about is environmental impact with public data. This investigative shows how you can investigate a company that is hiding information about its environmental impact only with public data. It helps to understand how the use of public data such as business registers, environmental reports, public administration controls, can be sufficient to demonstrate the negative impact of industrial activities. That also show how FOIA’s request can be use to have a lot informations. Disclose obtained and studied several thousand documents that included prefectural decrees, sanitary inspection reports, and data concerning products evacuated into watercourses by Lactalis plants.