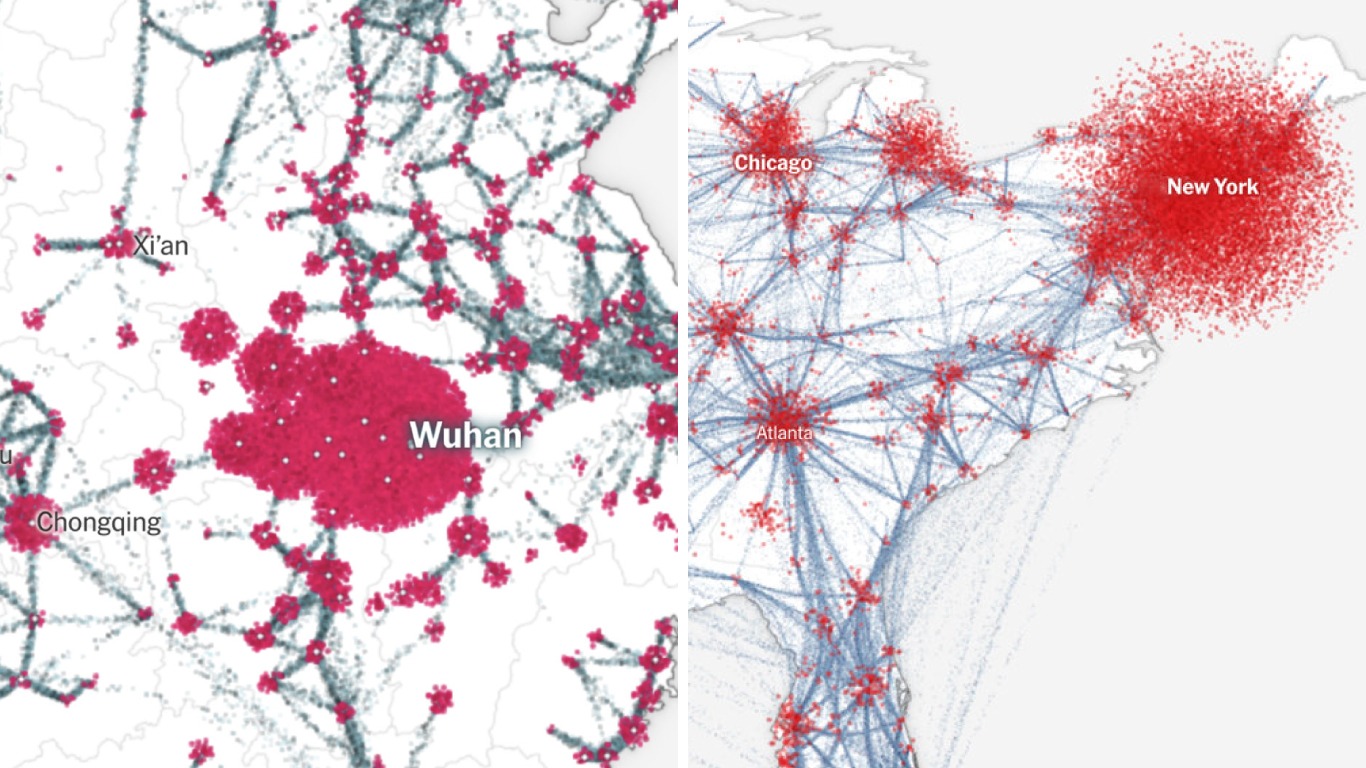 Clear and compelling visualizations illuminated two major public health failures. The first analyzed the movements of hundreds of millions of people to show why the most extensive global travel restrictions in history didn’t stop the epidemic. The second showed a vast wave of infection that swarmed across the United States before we knew about how bad it was, and how American officials chose to underestimate, downplay and ultimately ignore the threat.

These two stories wove together emerging science and data analysis to create animated explanations of how the pandemic spread beyond our grasp. Combining data journalism with cutting-edge visualizations, the stories assembled the evidence and showed who was at fault.

The reporting for each story was immense. For “How the Virus Got Out,” we worked with many of the world’s top disease researchers to assess what fueled the epidemic. We scraped cell-phone tracking data from Baidu and matched it to global flight traffic, allowing us to describe, for the first time, how people moved around China and the world in the early months. The analysis found that about seven million people left Wuhan before the Chinese government locked it down, seeding outbreaks in 26 countries. This story was published in mid-March, when many Americans were becoming aware of the threat. It became The Times’s most-read international story of the year.

For How the Virus Won, we spent months analyzing genetic data, case reports, disease modeling and travel patterns. We partnered with epidemiologists and geneticists, who provided exclusive research on the genetic traces of the outbreak and the central role of travel from New York City. We visualized the hidden spread of the virus in the early months of the year, when the public didn’t know where the virus was and officials waited to act. Those delays, we estimated with Columbia University researchers, cost tens of thousands of lives.

Tom Inglesby, one of country’s top public health researchers, tweeted: “@CDCgov should be doing analyses like this NYT story to understand pandemic. This kind of analysis should be encouraged and permitted by Administration. Information needs to flow freely to understand exactly what happened, is happening, as it has in past outbreaks.” President Trump called the estimates of lives lost a “political hit job.”

Both stories used WebGL to visualize the spread of the virus. The Three.js javascript library allowed us to bring our data into a three dimensional space where we animated hundreds of thousands of particles representing healthy and infected populations, virus mutations, virus deaths and travel distances. We used our internal Node-based publishing system to constantly parse each dataset while we were making design decisions, to ensure we were always sketching with the latest data.

In order to visualize such a large number of data objects, we used a technique that bypassed the computer’s CPU by sending animation information directly to the graphics processor. The animation calculations, which would have normally created a bottleneck in the Three.js library, were computed by embedding values in our custom WebGL shaders. The performance of the reader’s browser was far better using this technique.

Adobe Illustrator, Autodesk Maya and QGIS were used to create the maps and 3D models.

Epidemics are difficult to understand. Viruses are invisible. Exponential growth is confusing. Testing is spotty. The hardest part about this project was finding a visualization form that could connect together what was happening in an intuitive way. And what was happening was terrifying.

We pushed the boundaries of what is possible in the browser, using technologies that would not have been possible just a few years ago. And we did it for our most ambitious telling of the world’s biggest story. But it was not visualization merely to track the virus — it was to help readers understand what went wrong.

Once you can visualize the invisible — we used dots of infections visiting new cities, growing quickly — then it’s easier to see why our various strategies didn’t work. Lockdowns were too late. New York City Mayor Bill DeBlasio’s March call to “get out of the town” was dangerous. Restrictions on travel from China meant little when cases were streaming in from Europe. We were limited by what we didn’t track and couldn’t see.

The projects were cohesive because we knew what we wanted to say. This came out of extensive conversations with researchers about the dynamics of outbreaks and the data we would need to illustrate them. It allowed us to be very specific about which data we would go after, the forms we would explore and — just as important — the data we would ignore. We spent weeks negotiating with flight data firms, for instance, arguing that their data could play an important public service. Every aspect — reporting, data gathering, visualizations, writing — had to support the central message we wanted to convey.

But beyond what the pieces explicitly say, the animations here helped convey a visceral understanding of what happened when words were insufficient. Fear that the virus is streaming into new cities. Awe at the explosive power of exponential growth. Outrage that officials refused to see what was all around them. Sadness at the invisible, uncounted lives that could have been saved. Ultimately, it is these messages that leave a lasting impact and show the unique power  of data visualization in an all-consuming crisis.