How safe is it for you to cycle to work?

How safe is it for you to cycle to work?

Organisation: The Times and The Sunday Times 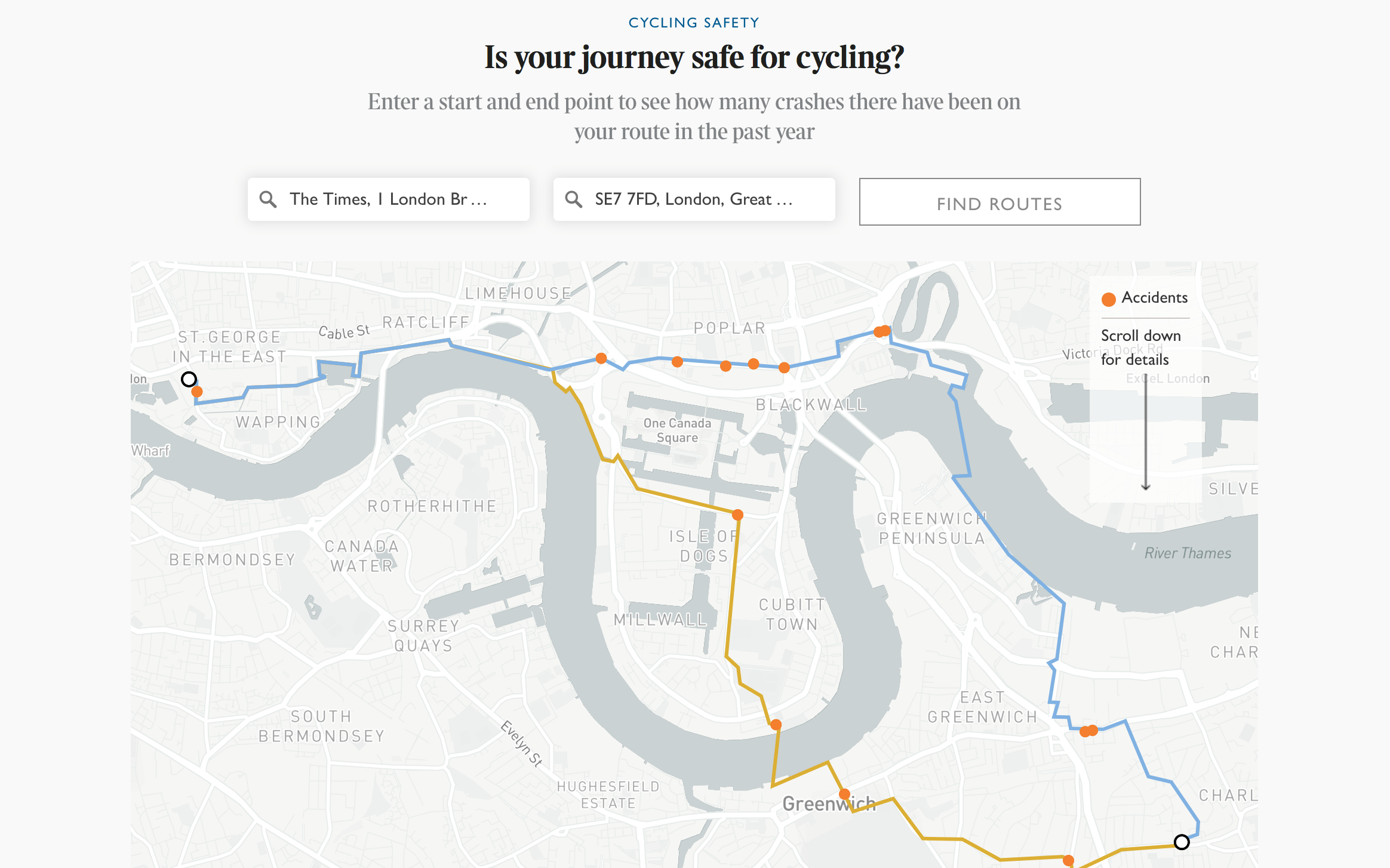 The Times and The Sunday Times has championed cycling safety for years, ever since it launched the “cities fit for cycling” campaign in 2012. In our latest contribution we produced an interactive series which allows readers to compare the safety of their own cycle journeys with the national average as well as with possible alternative routes.

Readers can input a starting position and a destination and calculate how many traffic crashes have been recorded by police en route. The tool is informed by data from the Stats19 database, a record of every vehicle crash kept by the Department of Transport.

The series ran at the top of the website from midday to midnight on August 28. It reached over 70,000 people over the next few days and scored well against internal engagement metrics.

The wealth of data underpinning the tool led to multiple news stories and a joint Times and Sunday Times series investigating cycling safety.

We combined the national accidents database with census data to determine the most popular start and end points for commuting by bike. The research showed that the overwhelming majority of crashes happened at junctions.

It demonstrated the scale of the challenge facing the government as it promises a “cycling and walking revolution”, with campaigners telling the Times that the findings showed ministers needed to spend more to deliver on their pledge to make travelling by bike safer.

We spoke to Victoria Lebrec who was on her way to work in London when she was crushed beneath a lorry that failed to spot her at a junction. She lost a leg in the accident and told the Times she wanted to see fully segregated cycle lanes to protect riders. A year after Ms Lebrec’s accident a 26-year-old woman was killed at the nearby Bank junction by a left-turning lorry.

The analysis also revealed that Oxford and Cambridge, two of the country’s most notoriously cycle-friendly cities, were home to the most high-risk stretches of road for commuters.

We also used the database to analyse more than 36,0000 weekend cycling accidents over the past decade, revealing that weekend cyclists racing against the clock could be pedalling into greater danger than the average commuter.

We wanted the interactive to be constructive as well as informative so we used the Mapbox API to return three journeys. Each route was ranked based on the number of fatal, severe and slight crashes that had happened the past three years, with the journey time and crashes per 1,000 miles providing additional detail. How the options compare to the 2,000 most popular routes in Britain is displayed on a violin plot to provide a national comparison.

The tool uses data from the Stats19 database, a comprehensive record of every vehicle crash kept by the Department of Transport. This was cleaned, reformatted and analysed using R, a statistical programming language.

This analysis is done on-the-fly in the reader’s browser using a javascript library called Turf.JS. It generates a buffer area around the route and uses point-in-polygon analysis to match geocoded incidents in the data. These are stored in a MySQL API.

The dashboard was built in vanilla javascript to make the time between searching and results displaying as quick as possible.

Our main technical challenge was keeping loading times down when analysing data in the browser. We were able to create a workable solution by putting the data behind an API, going without D3 to keep visualisations simple, and taking time to think about the user experience of waiting for results to return.

We wanted to build a consumer tool which would provide useful information a cyclist could use whenever planning a journey. It would need to be something they could return to and reuse. With this in mind, we made sure to return three possible routes so that users could make an informed choice.

Our community does not shy away from the topic of cyclists and their status on the road; it is one they engage with wholeheartedly. Our goal was to encourage their discussion and inform a constructive debate.

By presenting the information as simply as possible, providing useful context, and offering more than one answer to the question we had posed, our tool was extensive enough so that it did not stand in the way of debate by being too limited or offering simplified answers which could jar with our readers experiences.