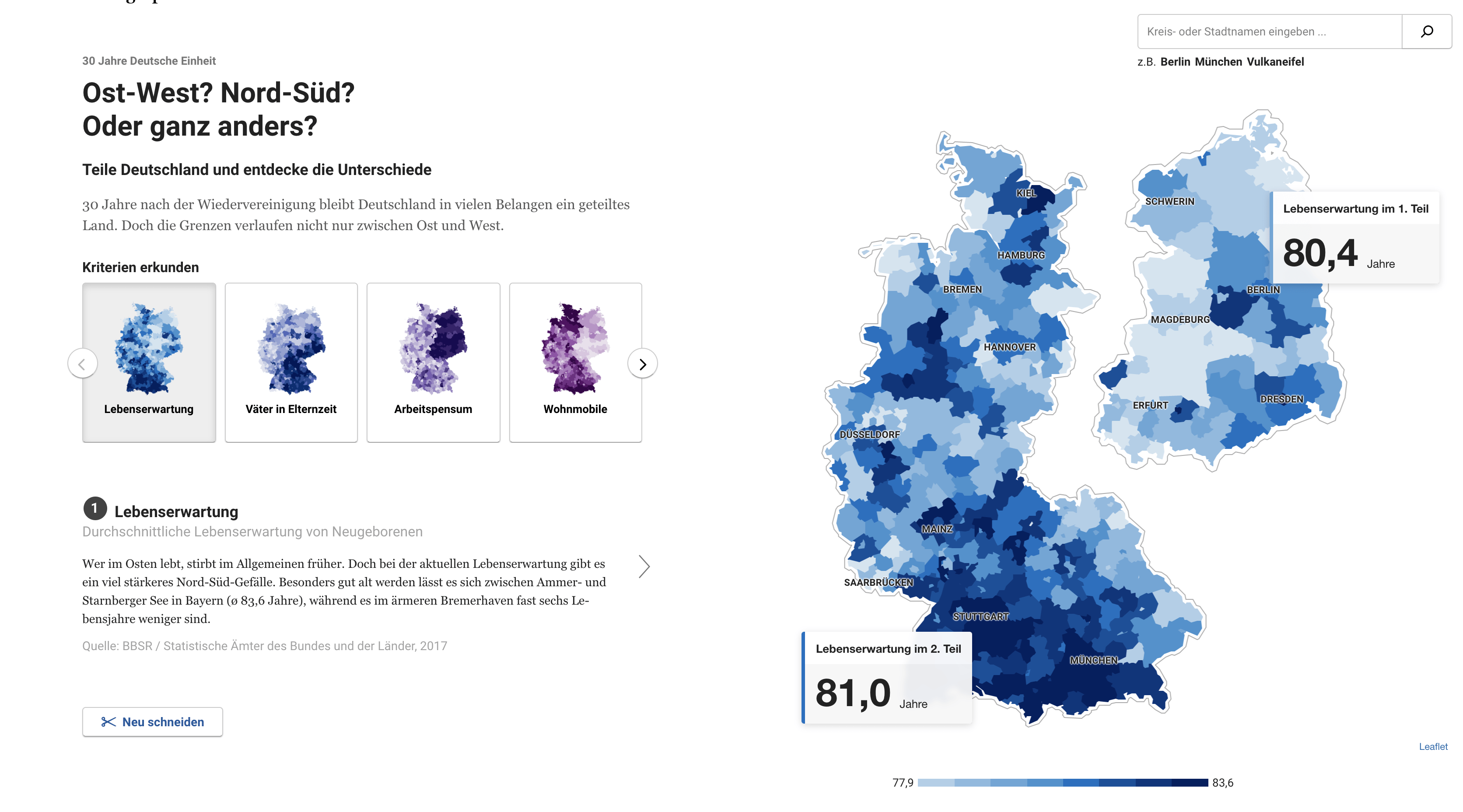 With an app that we launched for the 30th anniversary of German reunification, readers could divide a map of Germany into two and compare different characteristics of these parts. When flicking through the thirty characteristics users discover interesting, some serious and some funny distribution patterns (from income to ), and learn about regional and cultural differences in Germany in a playful way. The maps show how different social, political and economic factors still divide Germany into two parts today – along differing geographical lines. Readers can also use the tooltip to find out how their home town is positioned in

The project was surprisingly well-received by an international audience interested in exploring regional varieties in Germany and learning about the country in its nuances. Some readers used the tool to try and draw connections between certain regions of Germany and regions of other countries they knew. Inside Germany, the application was widely shared, including by the federal statistics office whose data the application was largely but not exclusively based on. Although the time of publication was shortly before the day of German Unity, which is a holiday in Germany, and data visualizations on this topic are no surprise, the special take of being able to divide Germany itself, even into North and South or completely different, was something new that appealed to readers. Despite the pandemic dominating the news, the project met with immense interest, more than 100,000 visits on the first day.

In the research process we used Python as well as different APIs to gather data on characteristics where there was no official data available. RStudio/R was used for wrangling and then visualizing the different datasets on a map of Germany’s 401 administrative districts. These preliminary plots were used to choose datasets with interesting distribution patterns, while the final visualizations are rendered by the web application using D3.js based on csv files we generated with R.

Some of the data was challenging to convert into administrative districts, as was the case for raster-files of average annual sunshine duration or for data based on postal codes. During the web development process the idea of “cutting” the map into two by drawing a line was a difficult function to implement. While many organisations were publishing maps showing different socio-political, geographical etc divides, the project managed to find or create unconventional datasets to add, and developing the functionality that allows to compare the average of two parts and individual districts turned it into a unique, engaging user experience.

Users from an international audience asked for similar projects to be implemented for other countries. We learned that there is specific added value in a story that is not only focussed on one or a few connected metrics, but lets users explore and compare regions across different dimensions. It communicates a more faceted and complex story and history of different places than a story focussing on one aspect can do.
It was also a good example for finding stories in data, as we set out to find datasets that show interesting patterns and based on that found and told stories of different aspects. Some of these stories were new to us as well as most others and wouldn’t have been told if it wasn’t for the process- (rather than result-)oriented approach we took with this project.