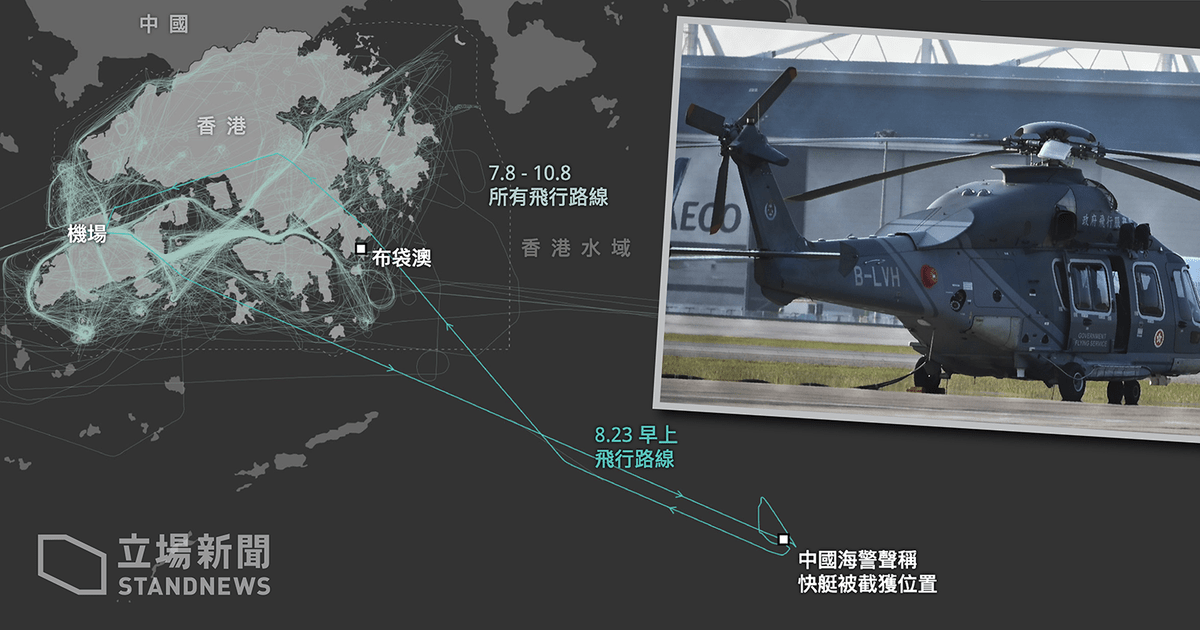 In August of 2020, 12 Hong Kongers were arrested at sea by Chinese police for illegal border crossing and sent to detention in mainland China. Hong Kong officials at first claimed to have no knowledge about the arrest, yet it was later revealed that the Hong Kong Government Flying Service flew two missions that coincided with the time and place of the arrest. This project reconstructed flight paths of government aircrafts the day of the arrest as well as months of flight records to point out suspicions around the event.

The police and the Government Flying Service had refused to give details of the mission from the day of the arrest. Chief Executive Carrie Lam, head of the Security Bureau and the Commissioner of the Police all claimed that the Hong Kong government had nothing to do with the arrest of the 12 Hong Kongers. But through reconstruction of the flight paths, analysis of flight data, it became clear that there were irregularities in the deployment of government aircrafts the day of the arrest, building more suspicion around the event.

Hong Kong protests that began in 2019 were mounted against a proposed law that allowed extradition to China where the justice system is highly politicized. The arrest and subsequent detainment of the 12 Hong Kongers was highly significant to the protest movement in Hong Kong. The way with which the government handled information around the arrests raised even more suspicions. This project served as an important record to counter the government narrative that claimed no collusion with Chinese authorities in the arrest of the twelve Hong Kongers.

We scraped flight data from flight tracking sites, and used R to process the data. We also utilized open source software mapshaper.js and QGIS to plot the map data. Finally we used a combination of illustrator and d3.js to visualize the information for the web.

There was a huge amount of data associated with this story as we tried to piece together months of flight records from the Government Flying Service aircrafts. Flight tracking data is also somewhat inconsistent because of the limits of radar technology. Even after the initial effort of scraping the flight data, it was a difficult task to comb through the data and chain together flight information for individual flights in order to spot irregularities in deployment.

We also faced a quick turnaround on the stories as news was breaking fast. Each of the two visual stories was turned around in a day and involved a lot of technical challenges and reporting to pull together.

The political situation in Hong Kong has been on edge since protests began in 2019. Stories like these serve an important role in continuing to offer a spotlight on people involved in the protests as they face a government intent on stomping down opposition voices.

Flightradar24 and FlightAware are two of the world’s largest flight tracking data companies. There are troves of information available on the sites and are an important resource in investigative journalism that involves tracking flights. Beyond just scraping data from the sites, we were also able to reach out to these companies to help answer questions in order to untangle the data. It was important lesson in not handling the data in a vacuum but to interview the data provider when possible especially to better understand the shortcomings of the data.