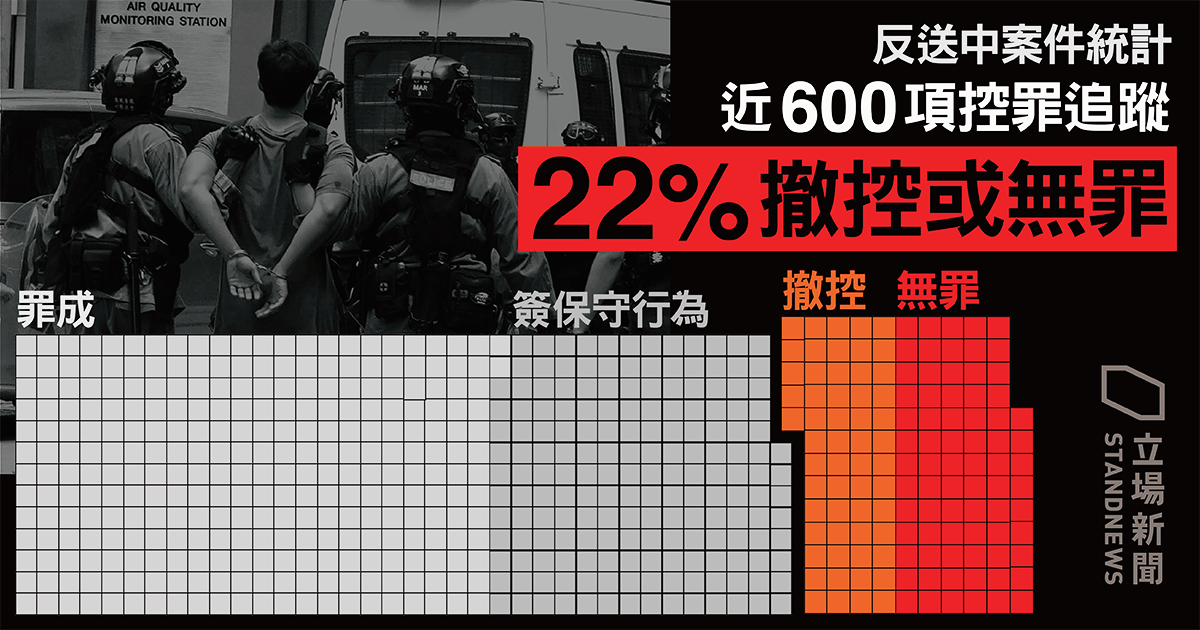 The battlefield for the anti-extradition law movement that roiled Hong Kong in 2019 has moved from the streets to the courthouses in 2020. In the past year, dozens of cases related to the movement move through the courts daily, yet it is hard to understand the impact and the extent of the legal crackdown that protesters faced. In this series, our reporters recorded details from every case that concluded since the movement began, totaling over 600 charges, to analyse whether Hong Kongers were granted a fair and just legal process against a government that so ruthlessly stomped down the movement.

There is no public database of cases related to the anti-extradition law movement, thus it is difficult to assess the ways in which the justice department have been handling these sometimes controversial cases. In this series, we tried to tackle three topics with our database: 1. the quality of police testimony; 2. outcomes of charges; 3. tracking rioting cases.

In the first part of the series, we recorded almost 40 cases in which the judge openly criticised police officers for providing faulty and inconsistent testimonies. Legal experts also noted that there have rarely been any consequences for police officers that provided testimonies that were disputed, even though it is illegal to provide false testimony.

Secondly, analyzing our database, we found that less than half of charges related to the movement were ruled as guilty. The police have repeatedly stated that the rate at which protesters had to “face legal consequences” were more than 80 percent, without making clear their statistical methods.

The most serious charge faced by protesters is rioting — a crime that could result in a 10-year sentence. Currently, 695 people have been charged with rioting. So far only 11 people have been sentenced to prison, while hundreds still face a long waiting process as their cases move through the legal system.

In this series, we went through a tedious data collection process and openly shared our database as a public service. We also tried to analyze case data to find patterns, paired with illustrative footage from protests, as well as various data visualizations, so that readers could better engage with and comprehend the current state of the social movement as hundreds of people are caught up in complicated legal processes.

Stand News has a team of reporters that cover the courts across Hong Kong daily. We collaborated in recording case details in a Google Spreadsheet. We also used Python to scrape public channels in Telegram that crowdsourced daily updates from the courthouses, for cases that our reporters were not able to physically attend.

In visualizing the data, we used d3.js to build charts and graphics, as well as After Effects in creating animations as well as annotating videos from scenes of protests.

The protests in Hong Kong that began in 2019 have sparked major changes in society. Local journalists face mounting pressure in covering protest related news, as politicians and fellow reporters have been arrested and charged for speaking out. Our reporters have stood at the front lines of the most intense clashes of the protests and now, under the guise of the national security law, we continue to do our best to give voice to the people as they face harsh sentences. To us, this series is an important record of the continuation of the protest movement, and a way to hold the government and the justice system accountable.

Collecting case data was a major challenge. Over 10,000 people have been arrested in the protests and over 2,000 have been charged. We decided only to tackle the cases which have concluded to limit the scope of the project. We would like to encourage other journalists to take on the challenge of building your own database when there is no public information available. At the same time, we think that it was a good strategy to try to limit the scale of the project to something that is more achievable.