Covid-19: The global crisis in data

Covid-19: The global crisis in data 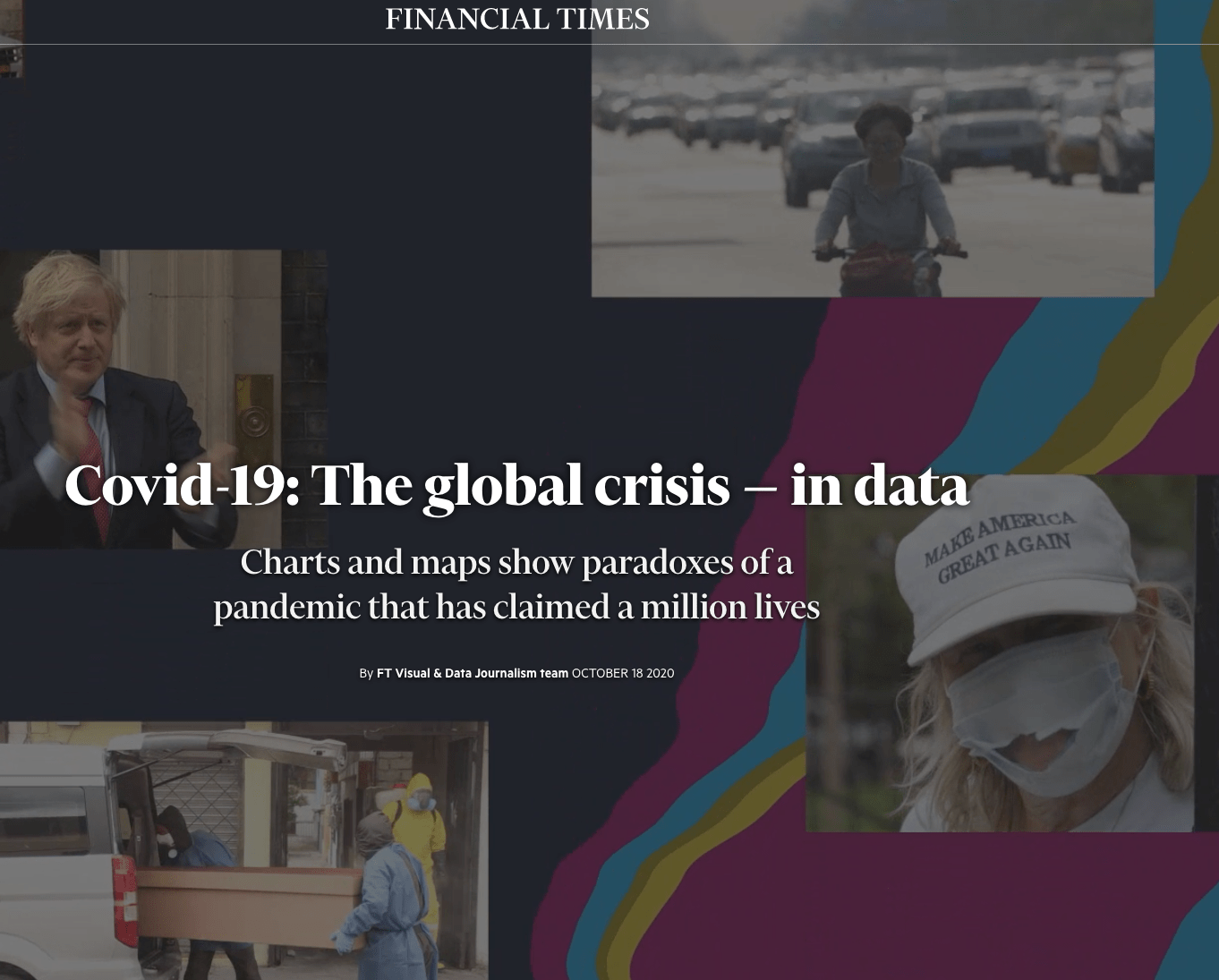 As part of a major series examining whether the world could have been spared from hte pandemic, the Financial Times Visual and Data Journalism team compiled and analysed data from around the world to produce a definitive, visually immersive analysis of the Covid-19 pandemic. Presented as a series of chronological chapters, the story used cutting-edge web design and data analysis/visualisation techniques to take readers on an authoritative journey from Wuhan, China in January, through to Europe’s second wave in October.

As part of the FT’s key coverage of the crisis, the story was made free-to-read and achieved outstanding reader engagement metrics. Most importantly, with an average viewing duration of over six minutes across hundreds of thousands of page views, this piece engaged and informed our readers. It was widely shared to enormously positive reviews on social media, including by one member of the UK government’s own Covid-19 science advisory committe (SAGE).

We delievered a compelling, tightly integrated combination of rich storytelling and in-depth analysis. The piece was cited by noted SEO expert Rand Fishkin as an example of ’10x content’ – “content that is at least ten times better than the next best piece of content available online on that same topic”.

Each one of these chapters, supporting by data and visuals, was crafted to better inform the public about the biggest threat to global health in a century. We think we succeeded – the piece became a much-cited reference point in critical debates in the early weeks of Europe’s second wave.

Firstly, I want to give some emphasis to the design process ahead of the tools used.

The story was designed from the ground up to provide a positive user experience, led by our User Experience Editor. We agreed in early team design sessions that we wanted to give the reader ‘intelligent incentives to keep scrolling’. Care and attention was given to every user interface element and how it would support the story. For example, an autoplaying video topper on the page was created to generate an emotional entry point for the reader based on particularly memorable moments from an unforgettable year. Meanwhile, a scrollytelling intro that provided some tension/teasing ahead of the detail that was to follow. Then, a scrollytelling approach deliberately connected each unfolding regional chapter to the bigger picture of the global death toll.

Next I want to talk about how we used data.

Data is often accused of being ‘sterile’, but we wanted the piece to generate an emotional response. We achieved this through careful design, not just with the intro, but with elements such as the gradual animated unfolding of the central streamgraph’s horrific death toll and the use of ‘active titles’ on each chart: data became visual rhetoric.

In terms of tools, we used an understandably broad range: the page itself was constructed with customised React and D3; R, QGIS and Adobe Illustrator were used to create the inline graphics within chapters, which were then rendered as SVG on the page. Video elements were prepped with Adobe AfterEffect/sElements. Zeplin was used for bespoke page design.

Without doubt, the hardest part of this project was planning and executing a hugely ambitious piece of work around a story that was still evolving at a rapid pace.

Our solution to this challenge was to run a parallel development process with user experience and page design being carried out in parallel with story development: Early in the project, the entire team worked together to agree a narrative vehicle for the piece: that it would be a combination of chronological and geographical. With the design work addressing that broad remit, individual chapter authors were then drawn from across the Visual and Data Journalism team who would research, visualise and write individual sections of the story. Earlier chapters were created first, providing a model for later chapters to follow. This approach meant that, althoug the piece took around two months from conception to publication, it still incorprated up-to-date information and analysis at the time it was published.

Another big advantage to the project’s workflow was that it drew on work that had already been carried out by the team earlier in the crisis;

We feel that the piece exudes a confidence that was created by six months of constant effort tracking, analysing and reporting the biggest global story of this century.

That it pays to put charts and maps on a page first and write around them! So often, newsroom workflows are dominated by an intertial compulsion to produce copy first, with graphics to follow as decoration. We feel that the cohesive narrative presented by the 2,000+ words in the story was entirely down to the way that the graphical analysis was used to compose the chapters and broader narrative structure of the piece first. The words followed — and were more confident because of it.

Having said that, we also feel that this piece reflects how important it is that data journalists should be encouraged to actually write longer stories — all too often, data jouranlists are thought of as ‘the graphics people’. In this piece, the words were finely crafted by writers who knew the data best — and it shows. It was particularly pleasing that entire sentences from the story were shared on social media almost as much as the graphics were, proving this was a story with substance and something to say.