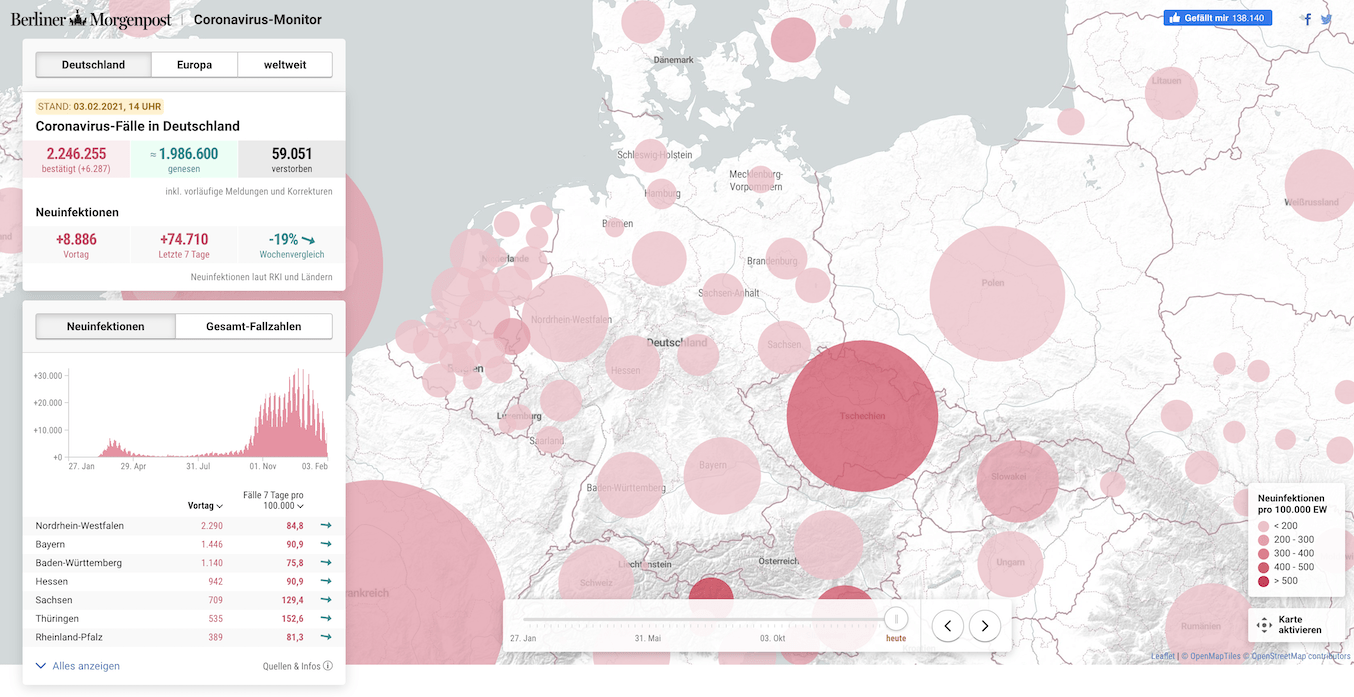 The Coronavirus-Monitor gives its users a comprehensive overview of the worldwide pandemic – with the latest figures fed into an easy to use tool. With the changing information needs features were changed, removed, and added. The home screen lets users explore the total number of infections, recoveries, deaths – for different countries, German federal states, by total and relative numbers, historical and current, in maps, graphs and tables. Additional sections visualize the development for Germany and lead to subprojects: to the ICU-Monitor showing the current utilization of German ICUs, to the analysis of excess mortality or the Vaccination-Monitor.

As the Coronavirus-Monitor was the first major German dashboard on coronavirus (first German case February 27, launch March 04), and offered real added value to the Johns-Hopkins-University dashboard through its additional data on Germany’s states as well as unique features, it landed a visitor success right on the first day. The enormous rush was kept stable by constantly integrating new features, reacting quickly to new information or information needs, and keeping the Monitor one step ahead of the competition in many of its offerings. With well over 300 million visits (400 million including the subprojects) in 2020, it is probably one of the most popular coronavirus resources in Germany and by far the most successful article in the history of the Funke Mediengruppe. One of the Group’s outlets, the Berliner Morgenpost, increased its number of unique users for March by 680 percent compared to the previous year, making the Monitor a huge success in raising brand awareness. In addition, it was instrumental in the success of the Coronavirus newsletter and newsblog, as well as for new subscriptions through its referrals to other resources of the Group, as internal analysis has shown. As it was the only platform at all to regularly show the latest figures for the German states, which were initially only published via individual press releases by authorities, it became the main source for JHU for Germany and thus the main source for many media brands. Thus, we were always one step ahead by having the numbers for Germany first, as the other German media brands received them through JHU with a reporting delay. Although they quickly set up their own great offerings and other data sources got available, the Coronavirus-Monitor remained the first stop for many users, still leading to record daily hits today.

The Coronavirus-Monitor is built modularly of multiple React.js widgets. The individual sections can be easily moved in their order, features can be adjusted and widgets can be included and updated on other project pages at the same time. Since the site had such immense success, the Maptiles from the third-party provider Maptiler quickly became too expensive, so the team set up their own Maptile Server. Data is scraped from multiple sites and sources or flows through APIs to our data server, where it is cleaned, renamed, and checked. Only then is the data passed to the project as JSON or CSV. Data for Germany is loaded from various official sources into a Google spreadsheet, where journalists from the team perform a daily manual check and then enter the data into the individual sheets for each federal state, from where it is in turn scraped and transferred to the data server. A Slack bot notifies the team of strange discrepancies, such as large downward corrections / decreasing total case counts. The maps are based on Leaflet.js, most of the graphics are built with d3.js.

Similar to how all journalists probably felt about this topic, the dynamic situation and the constant changes to the official data sources were a great challenge. Especially in the beginning, when authorities or even the JHU regularly changed their data formats, publication times, or definitions without warning, this meant a lot of manual work, sometimes on a Sunday at midnight. Due to the immensely high number of hits and the fact that our Monitor was the main source for the German figures of the JHU and thus also of many media offerings for months, we also had a great responsibility to double-check the data and to make definition changes clear. In addition, a single statement by a politician could trigger a whole new information need, e.g. a whole new indicator with a new threshold for lockdown policies, to which we had to respond quickly with a new feature. And this year, of all years, we had no designer for months (May to August), which limited the team to two full-time employees and two freelancers (working a maximum of three days a week) for a few months. In addition, we found ourselves in the home office as early as April, and never before had to search so intensively for new backend solutions, as the many accesses and the ever-growing database threatened to bring our normally perfectly adequate technology to its knees. Because normally we work on projects that we plan once, publish, and then update with more current data a year later at most. All in all, every aspect of this project, the space and time circumstances, the technical solutions, was an absolute challenge and turned our entire workflow upside down. The team really outdid themselves in every aspect, and still managed to release other projects and subprojects.

This project showed what a small, dedicated and well organized team can do, even when circumstances are unfavorable (no designer for months, only two full-time employees, spontaneous home office) and variables are constantly changing (new backend solutions needed, data sources and information needs constantly changing). It also showed us what an impact it can have to quickly publish a well designed, minimal valuable product with the main focus to be simple and clear, a “no bullshit dashboard” as we called it internally, and then develop it further and further in the days to come, building it in a modular and agile way so you can react quickly to changes. Also important to the immense success were small features that set the Monitor apart from the competition: For example, it was the first dashboard that also showed recoveries, the first dashboard that offered a time slider, and through the manual work of the team in collecting the individual press releases, it was also the first dashboard with the current numbers for each German state. Such small features made the difference, catapulting a regional brand like Berliner Morgenpost to the top of unique-user growth in Germany and allowing this local newspaper to pass national brands like Süddeutsche Zeitung (known for example for the Panama Papers) or Zeit Online with its page views for a few weeks. Last but not least, this project can also show how money can be made with data journalism. Although it was not behind the paywall but remained freely accessible, considerable advertising revenue was generated and, by successfully redirecting the user flow to other resources such as the newsblog, newsletter sign-ups or other interactive subprojects with advertising integration, the reach of the entire offering of the Group was increased and even subscriptions were generated.