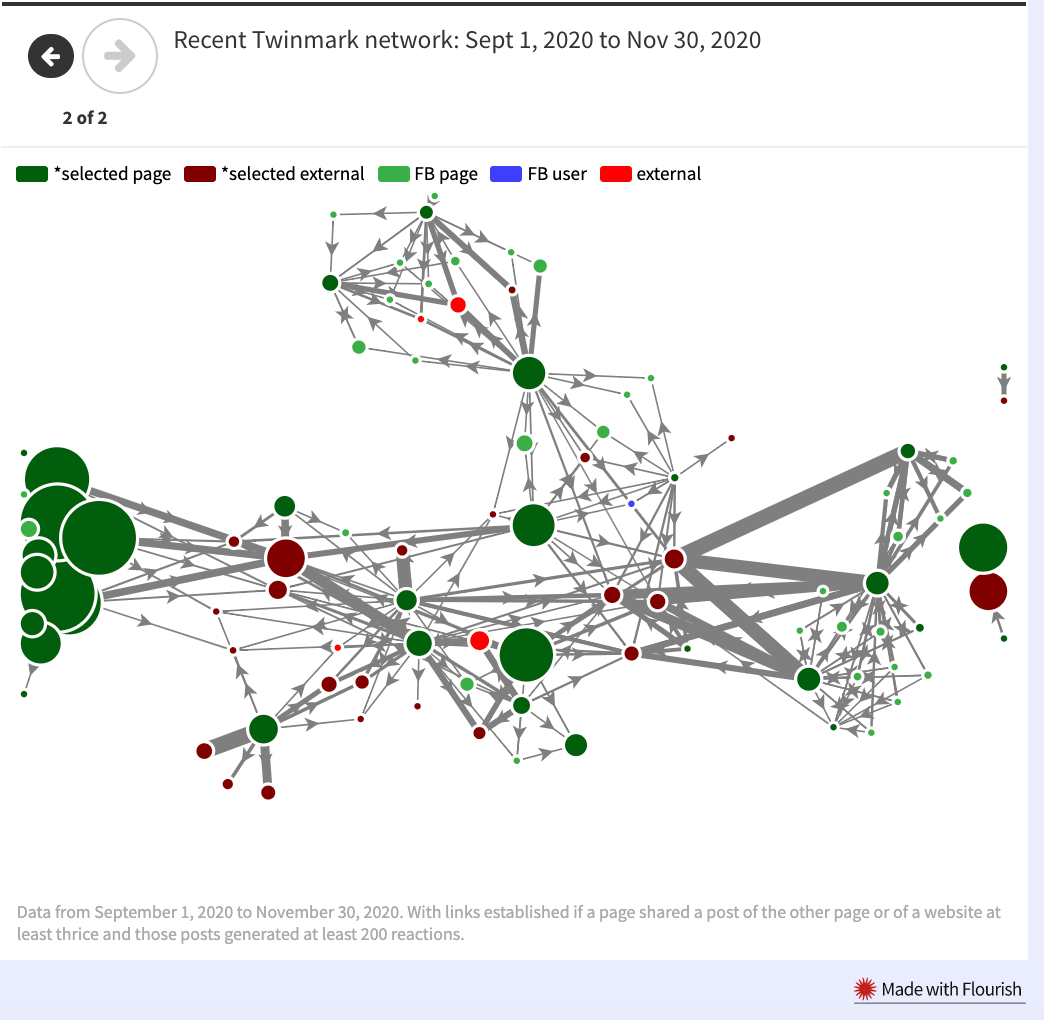 Just a few weeks after Facebook took down the pages of Twinmark Media Enterprises for coordinated inauthentic behavior in January 2019, the questionable network was already back on the platform, and it continues to exist. to date.

We found that Twinmark relied heavily on its partner Facebook pages to amplify content from its sites and increase clicks. Facebook took action and removed some Twinmark-linked pages and accounts, but only after the issue was raised with them.

The data-driven investigative piece unearthed the loopholes in Facebook’s system and how these are being used by the same groups/companies/websites that the tech company took down for coordinated inauthentic behavior.

The story also brought to public attention the tactics they use in finding their way back to business, gaining fake engagement, and spreading propaganda and mis/disinformation. My story led to better understanding of the issue among Filipinos, something crucial as we approach a presidential election.

Twinmark and its network have been instrumental in spreading hate, propaganda, and disinformation since 2016. In the run up to the 2022 presidential election, this poses even greater threats to our struggling democracy.

Ultimately, because of my story, Facebook took down several accounts and pages mentioned, thereby confirming results of our months long investigation.

We used our own social media monitoring tool, which monitors publicly available posts on Facebook, to keep track of the accounts’ history of activity. I also closely monitored specific users, accounts and websites daily for almost 5 months. On top of this, I created a database using website identifiers to link the new and previously taken down websites.

A verified internal Twinmark database also provided an added layer of verification for the connections I identified.

I then used Flourish to display the connections among websites, and Facebook accounts and pages so the audience can further understand the ties.

The most difficult part in doing this project was determining the exact links between:

Another difficult part was determining the real people behind these accounts and websites. They really tried to hide in anonymity, learning from their mistakes before the first Facebook takedown in 2019.

But we were able to identify them using a variety of methods: through our own social media monitoring tool, their website identifiers, manual monitoring of suspected accounts for 5 months, and through interviews with at least two former Twinmark employees and one Facebook page administrator.

The nominated article should be selected for the award because of how it used social media data to seek accountability from Facebook and for continuously shedding the light on the fight against disinformation in the country.

While social media data are publicly available, analyzing them could be difficult and complicated. Despite this, the story proves that constant tracking of publicly available posts can help track and fight disinformation.

Millions of Filipinos are on Facebook. It’s practically our Internet. Because of this, the platform has become the real estate of choice by organized disinformation campaigns in the Philippines, including that of the state, even before it was used in the West.

It is critical for the media to learn, unearth, and make the public aware of the different disinformation and propaganda strategies, and to consistently do such stories so as not to drop the ball.

In a way, the story held power, including Facebook, to account. After we broke the story, Facebook took down the offspring of the original networks that were shuttered.

Despite this, we continue to ask: What else should be done?

We continue to do similar stories especially as we prepare for our 2022 presidential elections.

Using data obtained for this project, a colleague and I are currently working on a follow up story which investigates the roles of Filipino celebrities and influencers in disinformation.