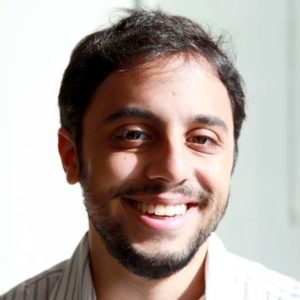 Bruno Fonseca is an editor and reporter at Agência Pública, the first non-profit investigative news agency in Brazil. A multimedia reporter, he works with infographics, data, videos and animation. His work has received several awards, such as the Petrobras Journalism Award, the Vladimir Herzog Award for Human Rights, the Brazilian Bar Association Journalism Award for Human Rights and the first and second place of the Data Journalism Contest “All Eyes on the Amazon” in 2020. Fonseca has bachelor and master degrees from the Federal University of Minas Gerais and attended the Thomson Reuters Journalism Course on Multimedia Reporting.

He’s been working as a journalist for 10 years, developing data visualization and infographics since the beginning of his career. Throughout his trajectory he has dedicated himself to producing illustration and animation works to create multimedia contents that allow the visualization of large data analysis. He has been working at Agência Pública for seven years conducting investigations on topics such as environment, health, public policies and gender and race-based inequalities using open databases. His professional inspirations range from design professionals like Alberto Cairo, Giorgia Lupi and Mariana Santos, to journalists working with public databases like Amanda Rossi, Carolina Moreno, Cecília Olliveira, Gustavo Faleiro, Sérgio Spagnuolo and Stefano Wrobleski.

In 2020, Bruno Fonseca was part of Agência Pública’s coverage of the consequences of the pandemic on the lives of the most vulnerable Brazilians. He also dedicated himself to investigating the Bolsonaro administration policies for the environment in 2020, when the Amazon rainforest deforestation surged to 12-year high under Bolsonaro and fires ravaged the Pantanal region; and he helped cover the Brazilian municipal elections in november. For this application we have selected three data-oriented pieces that represent the work Bruno Fonseca developed at Agência Pública in 2020. He has acted as data editor, reporter and art/infographic editor in all of them.

The first article, entitled “In Brazil, COVID-19 death rate for black community is higher than for other populations” and published in may, showed how the pandemic has been affecting the black and white populations differently in Brazil. It revealed that, at that time, one in three black patients had died from complications due to the virus compared to one in 4.4 deaths among white Brazilian patients. The piece also showed the discrepancies in deaths and hospitalizations between rich and mainly white neighbourhoods and poor and predominantly black ones. This article was republished by 54 other media outlets and was translated to english, spanish, french, italian, arabic, russian and greek. It was featured in prominent national and international outlets such as Animal Político (México), MSN Mexico and MSN Colombia, Revista Semana (Colombia) and Yahoo! (US). So far, the piece has been mentioned and/or backlinked in more than 100 publications, including articles by the brazilian newspaper Estadão, one of the most prominent in the country, and The Guardian.

The second article, “Bolsonaro government reduces fines in municipalities where deforestation is growing”, was published in August. It revealed that for every ten municipalities in the Amazon region where there were less fines for environmental crimes in 2019, eight reported an increase in deforestation. Moreover, it showed that the Bolsonaro administration had even reduced the number of fines in 2020, in relation to the previous year. The article was republished by 22 national websites and mentioned in articles by international outlets, such as Vice News (US) and Diário de Notícias (Portugal). This story was also featured in the important french publication Courrier International.

The article third article, “In the Amazon, 118 politicians with environmental fines run for election”, revealed that 118 of the candidates for mayor and deputy mayor in the November local elections had previously been fined for deforestation, illegal burning, exploitation of native forest located in reserves, or providing false information to environmental agencies to cover up illegal activities – and that 28 of them were running for reelection. The piece was republished 19 times, including an english version featured in the conservation and environmental science news platform Mongabay.

All three pieces were produced using open data, accessible to any citizens and journalists. These works shine light on important social issues, necessary to better understand the current political, environmental and health scenario in Brazil. By doing so, they had repercussions on the national press and served as tools to help civil society organisations orient their actions.

The biggest challenge was finding new and investigative ways to process open databases that could aid the comprehension of the various social and political contexts in today’s Brazil. Moreover, working with these open databases without any assistance or answers from the government agencies that produced them was a tough challenge. Different formats and missing information in several databases made the work more complex and added additional layers of research and investigations to be done using other means and sources to fill in the gaps.