Winner: See How the World’s Most Polluted Air Compares With Your City’s 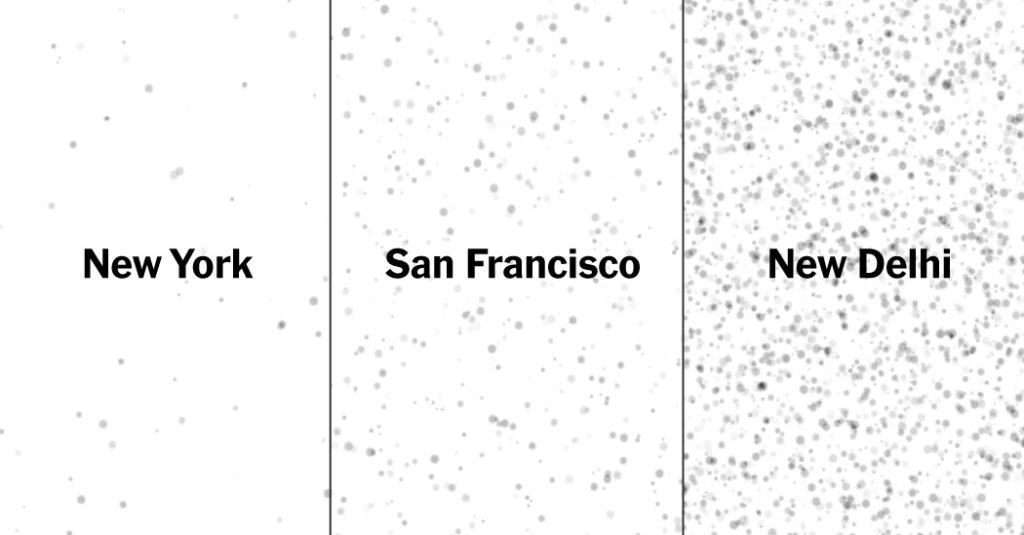 Jury’s comment: This data visualization is effective and pushes the limit in explaining a complex and important topic, making it easy to understand in a detailed and granular way the public health hazard of air pollution that causes millions of deaths and illnesses worldwide. It combines the best of beauty, storytelling and interactive features. Users can learn via preset examples, or extract and produce their own stories and comparisons. In mobile, it excels, including AR experimentation that brings data to life. The visualization builds empathy through data, using case studies of polluted air that have recently made news and making visible the invisible. The combination of precision in data usage with the best of visual digital technologies and users’ interaction, works perfectly to tell this complex story in an engaging and meaningful way.

Project description: Outdoor particulate pollution known as PM2.5 is responsible for millions of deaths around the world each year and many more illnesses. We created a special project that visualizes this damaging but often invisible pollution. The interactive article allows readers to (safely) experience what it’s like to breathe some of the worst air in the world in comparison to the air in their own city or town, giving them a more personal understanding of the scale of this public health hazard.

Impact: This air pollution visualization project was one of The Times’ most-viewed stories of the year, garnering well over a million page views in a single day. It also had some of the highest reader engagement. Readers took to social media, unprompted, to share the air pollution averages for their own city as well as screenshots of the project’s visualizations, and to express concern over recent upticks in air pollution. Making air pollution more tangible to the general public is especially important today, as air quality in the United States has worsened after decades of gains, while much of the world’s population continues to breathe high levels of pollution. At the same time, it is becoming more clear that air pollution affects human health at ever more granular scales. Experts from the public health community, including the United Nations and WHO, have reached out about using the project for educational purposes.

Techniques/technologies: Particle visualization and charts: The data analysis was done using Python. Visuals in the story were created using WebGL and D3. Augmented reality version: The AR experience was created using Xcode and Apple SceneKit. (The AR scene being responsive to data was created using Swift in Xcode.) Please not that the AR version is only available on the New York Times app and on iPhones due to technological constraints of the Android operating system. Map: The map was rendered by converting netCDF files using R and gdal. The animation was done using Adobe’s After Effects and Illustrator.

The hardest part of this project: We wanted the project to build empathy through data by connecting people’s own experience (what average air pollution is like in their own city) to various case studies of polluted air that have recently made news. To achieve that, we strove to make sure the visualization had the right feeling of movement in space to evoke polluted air, while still reflecting that it a data visualization rather than an accurate reflection of what pollution might look like at a specific place and time. We went through many ideas for how to represent this pollution – as particles, as haze, etc. – and many ways to show it to our audience. The end goal: Walking the line between what is scientifically accurate while also allowing people to feel a natural connection between the viz and the subject being visualized (pollution).

To ensure scientific accuracy, we ran our visualization ideas past half a dozen experts who study particulate matter pollution in order to best decide how to show these damaging particles. In the end we settled on a deceptively simple presentation: Filling up your single screen (or room in AR) with particles as you scroll (or tap) in order to create a sense of “filling” your lungs with this sort of air. Our readers’ reactions to the piece suggest that we got the balance right.

What can others learn from this project: One lesson we hope people will take away is that it is possible to create emotional connections to data through visualization. We built the story introduction so that readers become the central character, allowing them to use their own experience of polluted air as a benchmark by which to judge and understand the scale of pollution elsewhere. That builds a deeper understanding of the issue at stake than just showing data for far-away places they may have never visited. On the more technical side, many people commented on the project’s innovative use of augmented reality. The Project leveraged AR to make something that is all around us but often invisible actually visible in 3D space. Previously, experiments with AR at the Times and in other newsroom mostly consisted of placing objects into space (such as the Times’ Lunar landing project) or creating a novel 3D space for exploration (such as the Guardian’s augmented reality project that allowed users to experience what being in solitary confinement is like).

Selected praise for the AR experience: